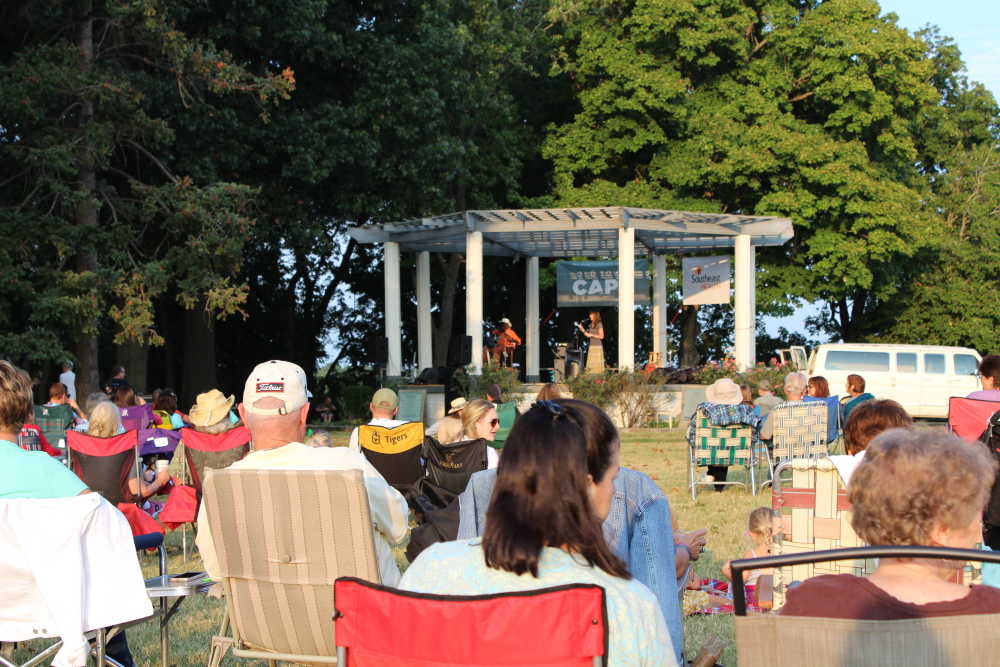 The Gazebo, pictured at Tunes at Twilight on Sept. 1, will be receiving a roof renovation with the funds from the grant.
Photo by Rachael Long

Downtown Cape Girardeau will be getting a facelift in early 2018 after winning a nationwide contest earlier this week.

American Express and National Geographic recently hosted a contest in conjunction with the National Trust for Historic Preservation called “Partners in Preservation.” This project seeks to preserve the history of local historic areas across the country. This year, 25 cities across America vied for the funding that would be distributed to one lucky city for preservation and restoration. Online votes determined the winner of the contest, and more than 920,000 votes were collected over the course of one month, ending Oct. 31. Cape Girardeau’s votes accounted for over 50,000 of the overall tally and beat out areas such as New Orleans, LA; Little Havana, FL; West Hollywood, CA and several other areas.

“We saw it as an awesome opportunity to bring in money to the community without any cost to taxpayers or local, privately-funded partners,” he said. “It really seemed like a too good to be true opportunity, and everything has led up to this.”

The application process was detailed, and Butler said the planned renovations for Cape include restoring and improving the historic Ivers Square gazebo area on the grounds of the Common Pleas Courthouse.

“In order to apply for the grant, we had to have an outline and a budget and a fairly detailed explanation of what we wanted to do with the money and do at the site,” he said. “For us that’s going to be putting a roof on the gazebo, enhancing lighting and electrical features at the gazebo, some landscaping improvements, some repairs to the fountain that’s on the grounds as well as some new benches and trashcans.”

The area has special historical significance for several reasons. One of the most prominent involves the bandstand performances from the municipal band that used to take place at the gazebo after it was originally constructed in 1914. Another centers on James Ivers, a former slave who enlisted for the Union Army on the steps of the Common Pleas Courthouse after receiving his freedom. The area recently underwent a name change to commemorate Ivers and his legacy in June.

“He and his family have a very rich history that’s very significant to Cape Girardeau that’s recently been uncovered,” he said. “We saw [the name-change] as an awesome time to be able to bring that property even further into the community spotlight.”

Butler said winning the contest was a testament to how closely-knit Cape’s area is and how special the town is.

“We knew that Cape Girardeau would rally behind something like this,” he said. “People in Cape are very aware of its history and are very excited to support a project like this. I think Cape Girardeau as a whole is a small-town community with big city amenities.”

Butler also said the fact that Cape Girardeau is a college town has a big impact on the growth and overall culture of the city and the downtown area.

Most importantly, Butler said the community deserves a thank you for its dedication to the downtown area.

“We really want to thank everyone in the community for coming out and voting for this project. We couldn’t have done it at all without the people here in Cape Girardeau that have been passionate about this project,” he said. “We’re excited and we’re glad to have everyone on board.”

Renovations are officially allowed to begin Jan. 1, 2018, and the city hopes to have the project completed by May of the same year in time for the beginning of 2018’s Tunes at Twilight series.