By Matthew Dollard ~ A&E Editor
From the Arrow podcast room, Dyami Cluney talks Cape music, songwriting and the upcoming final rounds of the Battle of the Bands Nov.25 to open for Spill-canvas at Mixing Ten.

This weekend, Nov. 10 and 11, eight rising bands fought to advance to the final round of Mixing 10’s Battle of the Bands.

The five bands that received the most crowd support in round one will take the stage again at Mixing 10 Nov. 25 for the final round.

The victorious band will be rewarded with the opportunity to open for South Dakota rock band The Spill Canvas on Dec. 1 at the same location.

Mixing 10 owner Justin Aden said he sees the battle as a way to showcase local talent.

Local pop punk act Dyami Cluney and the alternative band System Slave were the first to move on, followed by a tuxedo-wearing jazz band called Weaknesses, grunge rocking Frago and the metal core group Neither of Me, the second night of the battle. 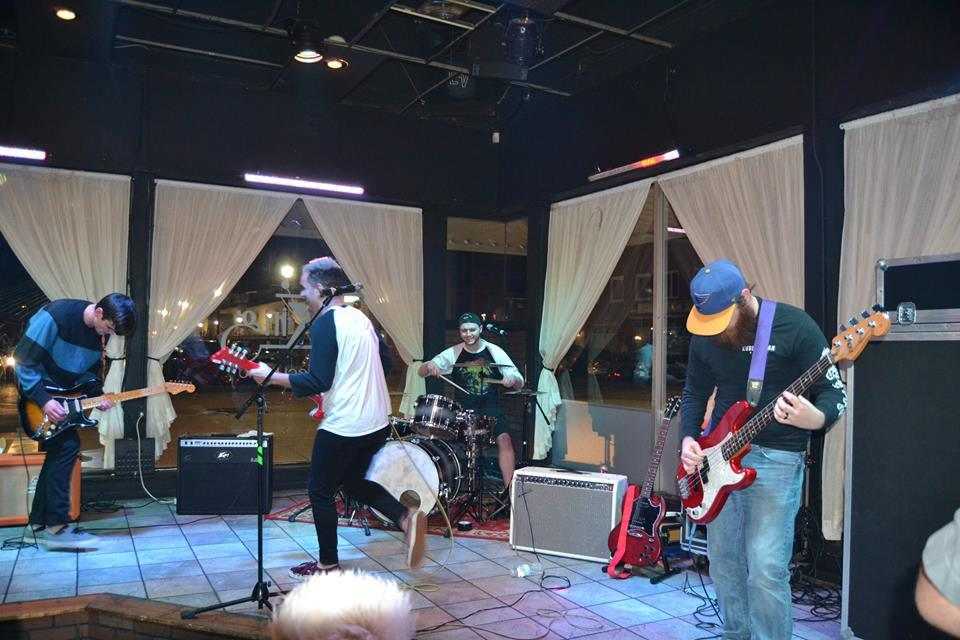 Johnny Frago of Frago said it was the band’s first time at Mixing 10, but it is one of the best venues they have played.

“We were ecstatic hearing that we were advancing and will play our hearts out on Nov. 25,” Frago said.

Neither of Me vocalist Troy Roberson said he and his bandmates were feeling the pressure Saturday night.

“We know without a doubt we’ll have to stay on our toes to stay in this race,” Robertson said. “This bar creates an environment for us local guys and our buds to really cut loose. The audience is amazing and so are these other musicians.”

Going into the final round it is hard to say who will come out on top. The only certainty is that the Nov. 25 show will be an energetic one.

Drummer of Weaknesses Evan Chapman said they were surprised when selected to advance to the next round.

“We were thrilled really,” Chapman said. “We definitely feel like we’ve taken on the role of the underdog. But to whoever wins, congratulations in advance. Weaknesses is proud to know you.”

Cluney said they were asked to join the battle after a last-minute cancellation.

“It’s hard to get a venue around here so we’re just happy to have a place to play,” Cluney said.

Aden said that since he has assumed ownership of the bar he has tried to have as much live music as possible.

“It’s fun to have that club scene and those DJs here but I want to change it up — or mix it up, if you will,” Aden said. “We have punk bands, country bands from Nashville, some metal.”

The Nov. 25 Battle of the Bands final round will have a $5 cover charge that includes one free drink for anyone who is 21 or older.