COLUMN: Until the race is run 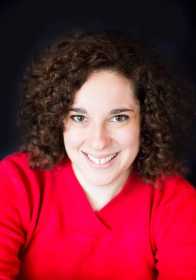 I can still remember the day these words were spoken to me. It was a warm spring day, and everyone at Bloomfield Elementary School was outside on the playground’s basketball court to have a “fun day.” We had just finished dancing to cringeworthy party songs, like “The Macarena,” and now each grade was to face off in a relay race.

The object of the game was simple: each person would stand in line at half court, put a balloon between his or her knees, run to the end of the court and go back to the start of the line to pass the balloon off to the next person until everyone in line had gone.

Normally, the thought of a relay race (or physical activity of any kind) made me incredibly nervous. As an 8-year-old with cerebral palsy, I was not exactly known for my athletic prowess. This time, however, I thought I could finally prove myself.

The line gradually moved up as my apprehension gradually grew stronger. When it was my turn, I tried as quickly as possible to situate the balloon and go. I placed the balloon between my knees and started to run. It fell to the ground. I was required to go back to the start of the line. I tried again with the same result. Several more failed attempts resulted in a growing sense of dread in me, and frustration in everyone else.

Finally, a teacher (who shall remain anonymous for this purpose) approached me in frustration.

I was devastated. Tears stung my eyes as I disgracefully made my way to the end of the line without finishing my turn. I thought this relay race was finally my chance to be seen as an asset, and not as the girl who wore leg braces and walked differently. But, alas, no.

For the rest of the day, I was deeply upset. Though I tried not to let it show, my sadness must have been noticeable because my teacher took me aside to ask what was wrong.

I couldn’t bring myself to tell her what had happened. How could I put this miserable feeling into words? What could I tell her? Could I accurately explain how my whole life up to this point felt like an uphill battle? Could I describe the dirty looks and whispers I had received upon starting school and the imprint one girl’s words had left when she told me how much she (and her family) supposedly didn’t like me? Could I say how sad another teacher’s words made me, moreso because I thought adults were more understanding? I simply didn’t know how. 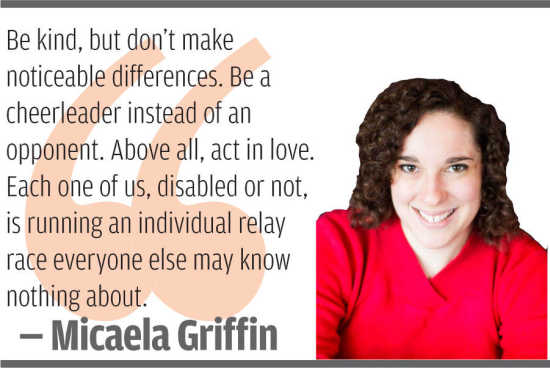 Though the day of that relay race is so infamously grilled into my mind, I can’t say I would change how it played out. You see, if not for that day, I might not have had the determination to prove the teacher wrong. It might not have been the catalyst around which I formed my goals and the motivator to put myself wholly into my schoolwork and the things I knew I was good at. I might never have known that feeling that pushed me to try as hard as I could, even when I didn’t want to.

For those who have never had any kind of interaction with a disabled person, I want to say one thing: be considerate, but don’t overcompensate. Be kind, but don’t make noticeable differences. Be a cheerleader instead of an opponent. Above all, act in love. Each one of us, disabled or not, is running an individual relay race everyone else may know nothing about. No matter how long it takes he or she to reach the finish line, no matter how many times he or she must start back at square one, it is not OK to make him or her feel less than human. You have the power to be a motivator in that race, so choose to be a positive one.