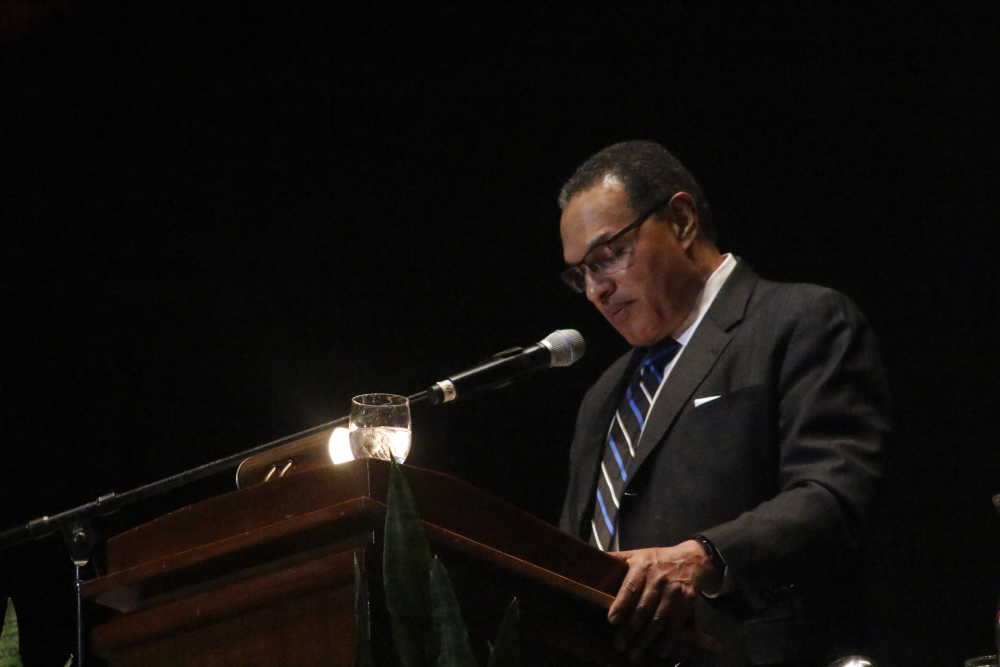 Keynote speaker Freeman Hrabowski prepares to speak before the audience in attendance for the MLK Celebration Dinner at the Show Me Center on Jan. 17.
Photo by Joshua Dodge ~ Assistant Photo Editor

Southeast’s 13th annual Dr. Martin Luther King Jr. Celebration Dinner brought hundreds of community members together Jan. 17 at the Show-Me Center, with the message: “Where do we go from here?”

The night’s keynote speaker was Freeman A. Hrabowski III, president of the University of Maryland, Baltimore County and a lifelong civil-rights activist. He was arrested in 1963 at the age of 12, marching with King in the Birmingham Children’s Crusade.

Sonia Rucker, assistant to the president for equity and diversity and dean of students, said the dinner, held every year on King’s birthday, has become a capstone event for the University.

The event led with the national anthem performed by Brianna Justine, a Southeast freshman, and jazz ensemble the American Standards, and a prayer from Pastor Benjamin Porter before Hrabowski addressed the audience.

Hrabowski said he was not a courageous child, but was convinced after hearing King’s words, from the back pew of a deep-south church, that even the actions of children have an impact on tomorrow. His goal, Hrabowski said, was to think of the possibilities.

Hrabowski read from Maya Angelou’s “On the Pulse of the Morning” with the words: “Lift up your eyes upon this day breaking for you. Give birth again, to the dream.”

He referenced the 1937 novel, “Their Eyes Were Watching God,” with the message there are two types of people: those who see their dreams fulfilled and those whose dreams seem forever deferred. The fundamental difference, he said, is education.

“If you were alive in the 1960s, you understand that the group assembled in this room tonight represents the impact of his dream,” Hrabowski said.

But the challenge, he said, is that for the utterly poor, the probability of earning a degree is about the same as it was in the 1960s.

“I wish that every child had somebody at home who realized the value of the education system,” he said. “Our job is to prepare a new generation of leading citizens. It’s not simply about Dr. King, or one person. It’s about all of us here tonight, who share his dream.”

He said the goal of the civil-rights movement is for every family to experience those same fundamental human rights.

Hrabowski closed with the idea that seeking evidence in every truth and voting are rights that must be exercised.

“Keep in mind, you are blessed to be in the greatest country the world has ever seen,” he said. “If people died so that we can vote, how dare we not?”

Hrabowski said upholding King’s dreams and values means helping others — especially the young, impoverished and disenfranchised — to know that they have a voice.

Trenden Everett, a theatre major at Southeast, said hearing from speakers who are continuing King’s legacy of progression, peace, nonviolence and national unity provides guidance for a young person’s path.

“After we graduate, we’re going to be the next step in the real world — in our businesses and our jobs and impacting our community,” Everett said. “We need a path to help us see what types of steps we would like to take.”

James Williams, assistant director for Southeast’s Academic Support Centers, said in this 50th year since King’s death, it is important to remember what he stood for, especially in the times we live in with a country so divided.

“Fifty years later, are we really living that dream?” Williams said. “If he were alive right now, what would that dream look like for him right now? Would he be pleased with us as a black community, or as a country right now?”

Mayor Harry Redinger said Cape Girardeau is working toward the same dream that King exposed the nation to in the 1960s, of togetherness and inclusiveness. He said increasing homeownership, emphasis on education and early childhood development are means to that end.

Banners hanging in the venue displayed the distinguished men and women who have spoken at the dinner in years past, along with the words of King, who would have been 89 this year. His words reminded those in attendance to stand up for what is right, for justice and that which is true.