Toes were tapping three days straight at the Bootheel Bluegrass Festival in Fruitland, an annual event that draws a broad and loyal crowd and cast of performers.

The festival was hosted at the Bavarian Halle in Jackson from Jan. 25 to 27 with a new cast of singers each day ranging in styles, backgrounds and songs. The groups included family bands and groups consisting of longtime friends, and the age range of the bands was diverse. The festival had several older performers, but also had younger performers, with the group Po’ Anna’s age gap stretching between 14 and 21.

The Halle is a section of the Drury Hotel designated for such events. 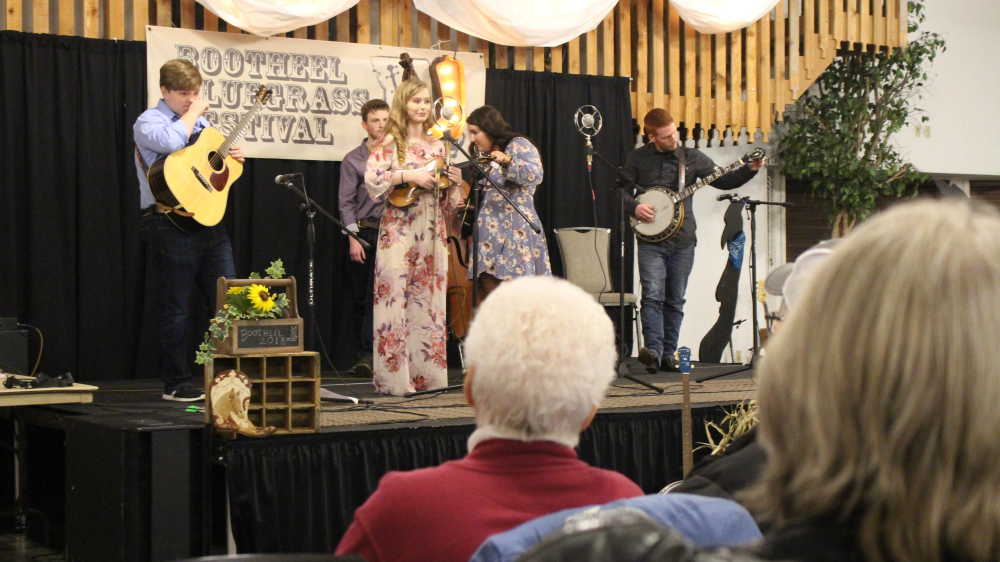 Po' Anna, a five-piece bluegrass band tune their instruments between songs during a performance at the Bootheel Bluegrass Festival at the Bavarian Halle in Jackson Jan. 27.
Photo by Clayton Hester

Don Goff of the band Rising Son said he had known each of the members of his group for years. After attending and performing in a jam session with the future co-singers, Goff suggested they should try singing together more after the good results. The chemistry of his group and their good musical sound, he said, was what prompted them to continue.

Goff booked the band at the Kentucky Opry in Draffenville and have been active since then. The acoustic quality of bluegrass was what had drawn him to the genre.

“In bluegrass it’s an even effort. You try to play to accent one another. There’s no star in the band,” he said. “We’re all even, musically and vocally.” 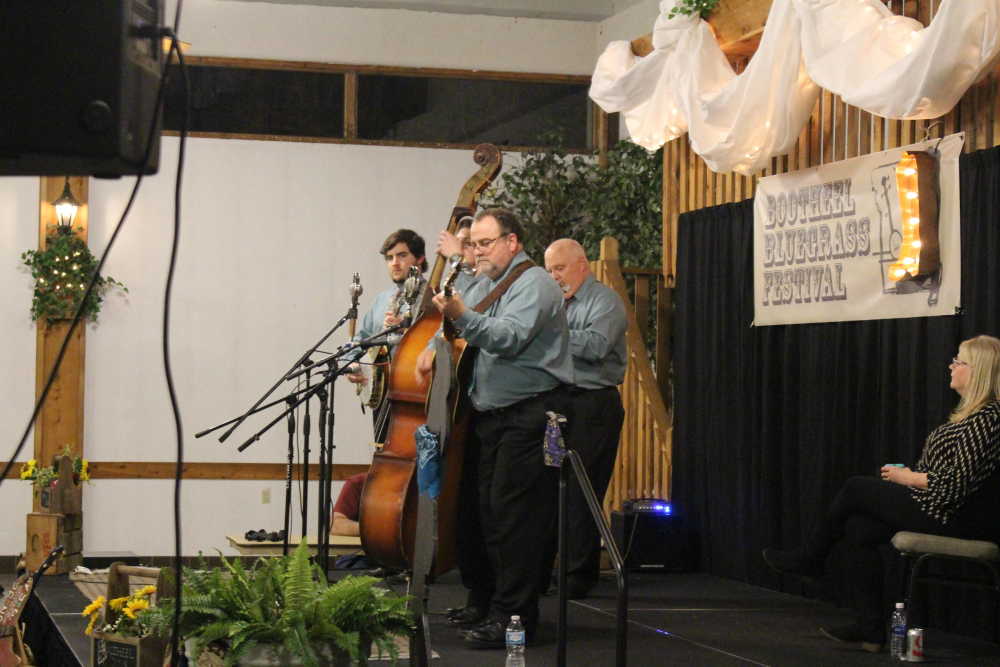 Bulll Hurman and Bull's Eye perform at the Bootheel Bluegrass Festival at the Bavarian Halle in Jackson Jan. 27.
Photo by Clayton Hester.

Some of the success of bluegrass, he said, is the adaptability of the genre. A bluegrass band could play in the park and make it their stage, he said. Rising Son often performs at churches in the local area. The largest of their coming performances is in Oakland, Missouri on Good Friday. They will be recording for a new album in the spring.

“It’s a growing music,” said Scott Amos, the patriarch in the family band Bluegrass Blondies. “It’s music played from the soul. There’s no sheet music to what we do. It’s all transferred by ear.”

Amos is the banjo player of the group, in which his three daughters play fiddle, mandolin and guitar. The Bluegrass Blondies come from Ottumwa, Iowa. He said they have traveled as far as the Nashville area to perform.

Amos said Bluegrass sounds first grew out of the Appalachian Mountains as a unique blend of Irish and Italian music that sings from the soul.

Saturday saw regular and annual performers but also welcomed guest groups to take the stage, with the guest group Po’ Anna singing the night of the 27th. Group member Becca Ash said their founding member Emalee Flatness derived the name of their band from the scientific name for bluegrass plant, “Poa annua."

Another band performing was Bull Harman and Bull’s Eye, which features Bull and Tammy Harman, organizers of the event.

Tammy Harman said this is the 13th year the festival has been held, with their band organizing since 2011. It was started by the Punches family in 2005.

Representatives of the radio station KJAV helped to organize the event and set up fundraisers and drawings to benefit the Lindsay Family, a bluegrass band whose youngest member Michael has been diagnosed with brain cancer.

The Bootheel Bluegrass Festival is held the last week of January annually.