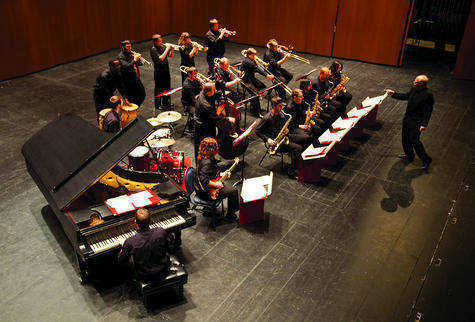 Jazz students, educators and virtuosos will set up shop at the River Campus for the Clark Terry/ Phi Mu Alpha Jazz Festival Friday and Thursday.

The festival will include performances by 26 bands, big and small, along with short sets by Southeast students. Students will be split up into two groups — one a jazz lab for beginners, and the second a studio ensemble for more experienced players.

The festival will also feature Southeast professor Jay Contrino and two other music educators from different parts of the country: Dan Davey of Portland, Oregon., a professional freelance jazz musician who plays piano, pipe organ and trumpet, and Dr. Javier Stuppard of Huston-Tillotson University, who has been featured in national educational conferences.

The Jazz festival this year will be organized and conducted by Dr. Joseph Jefferson, who is in his first year as director of jazz studies.

The festival will feature a variety of music and arrangements, including blues, classical jazz, swing and contemporary jazz, Jefferson said.

The 20th anniversary of the Clarpetary Phi Mu Alpha Jazz Festival which will be featured with a gala concert Friday night.

The studio ensemble will perform noon Friday with a short set, and the lab band will play a short set at noon Saturday.

Special guest Andre Haywood, a professional trombonist and educator, will perform at the festival as well, leading with a piece dedicated to Carl Fontana.

Jefferson said Haywood will perform one of his own pieces, “Dre’s Blues,“ that was recently arranged by Kendall Moore for a large ensemble.

“I'm hoping it's going to be a fantastic turn out this year. We've been advertising, we've really been pushing it, I’m hoping to see as many people as possible at the gala concert.” Jefferson said.

The festival will be held from 8 a.m. to 4 p.m. Friday and 9 a.m. to 5 p.m. Saturday, with a public performance Feb. 2 at Bedell Performance Hall. Tickets are $12 at the River Campus Box Office.