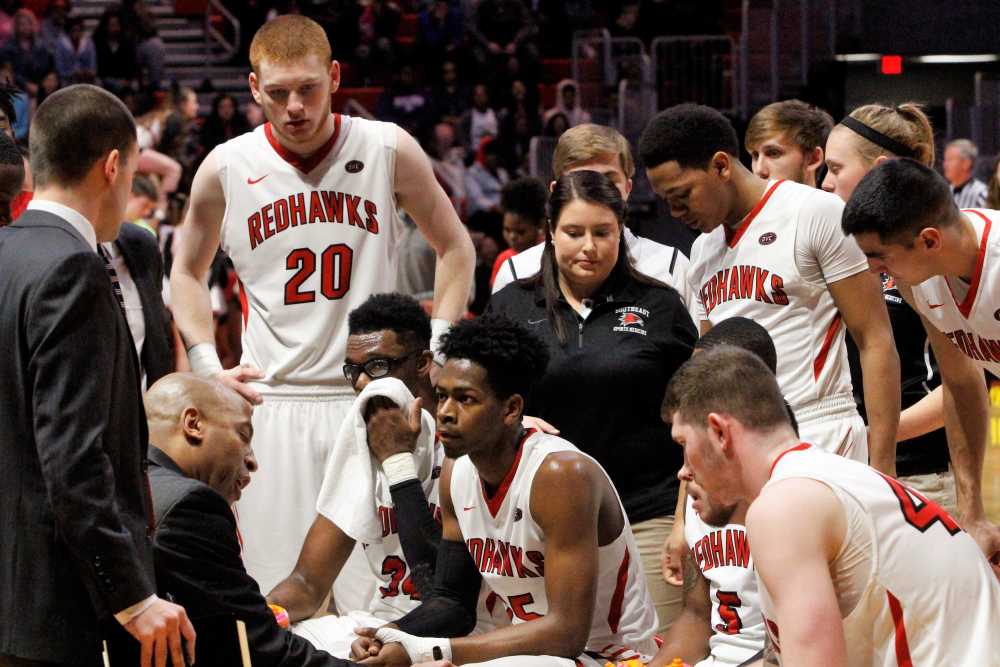 Coach Rick Ray outlines the next play of the game to his players during a timeout.
Photo by Josh Dodge

The Southeast men's basketball team came up short against Austin Peay University by a score of 96-81 on Saturday, dropping their record to 10-15 overall and 4-8 in Ohio Valley Conference play.

Austin Peay took over the game in the second half, behind 28 points from senior forward Averyl Ugba, who had 16 points in the first half.

Southeast head coach Rick Ray said his team should have been better prepared for Ugba and freshman guard Terry Taylor, who chipped in 19 points and 12 rebounds.

“This is not new information. We saw it on tape,” Ray said. “We got to live up to the physicality of playing them, and our guys didn’t want any part of playing them.”

Southeast was right in the game until the midway point of the second half when Austin Peay extended its lead to 77-64.

It was Southeast’s second home loss in a row, and fourth straight overall after falling to Murray State 87-75 on Thursday night.

A crowd of 2,234 came to see the Redhawks on Saturday “I told our players not to be surprised if they don’t see the support in the future because people came out to support them and they didn’t live up to the challenge,” Ray said.

Southeast has given up an average of 87 points per game over its last three games. Junior center Mark Laros there needs to more improvement on the defensive end if the Redhawks want to start winning games.

“It’s really important. We have to get stops. That’s what we have to focus on,” Laros said.

One of the big storylines heading into Saturday’s game was sophomore guard Denzel Mahoney’s quest for 1,000 career points. After a 30-point performance against Murray State, Mahoney needed 29 points Saturday to reach the milestone. Mahoney scored 20 points Saturday on 7-18 shooting, bringing his career point total to 9,991. Mahoney, in just his second season, is averaging a team-high 19.9 points per game this season.

Southeast takes on Morehead State on the road on Thursday, Feb. 8 in its next game.