Ledarrius Brewer leads the Redhawks to victory over Eastern Illinois 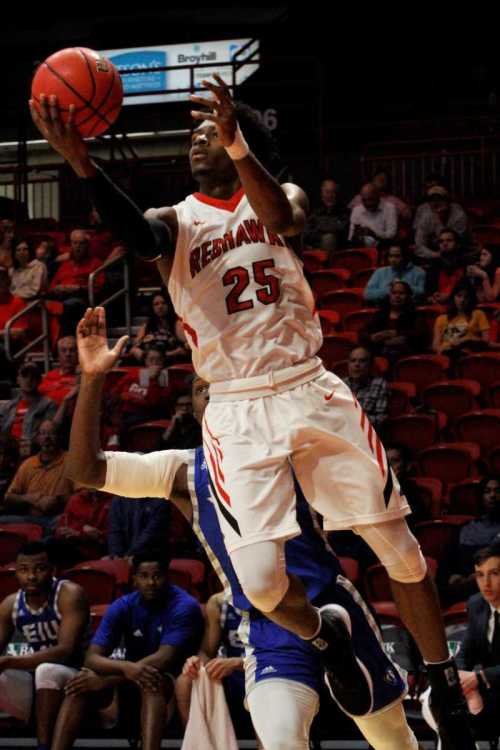 Freshman guard Ledarrius Brewer drives to the hoop against the Eastern Illinois Panthers on Feb. 15 in the Show Me Center.
Photo by Joshua Dodge

The Redhawks improved to 7-8 in Ohio Valley Conference play with an 80-73 victory over Eastern Illinois on Thursday night.

Freshman guard Ledarrius Brewer scored a career-high 34 points to lead Southeast to its third straight victory. His seven made 3-pointers, on 10 attempts, were the most by any Redhawks in a game this season. Southeast shot 13 of 22 (59 percent) behind the arc on the night.

The team’s typical leading scorer, sophomore guard Denzel Mahoney, scored only one point in the second half, going 0-6 from the field. A 14-point run by EIU to open the second half made it a one-point game.

Later in the half, a 3-pointer by guard Montell Goodwin with 3:28 left in the game brought the Panthers within four points of the lead. That would start a drought of over three minutes for the Panthers which they would not make a field goal, allowing Southeast to pull away and close out the victory.

The Redhawks will host SIUE (9-17, 5-10) at 4:15 p.m., Saturday in conference action, as Southeast will try to extend their three-game winning streak.