A marathon of a read, don’t be a square, and in the words of Sammy Hagar: Tell ‘em It’s gonna be another Rock ‘n’ Roll weekend

The poster for Heet and the A.C.'s at the Rude Dog Pub Friday, March 2.
Submitted photo

In need of rad plans this weekend that don’t involve being the oldest person in the bar? Look no further, here’s the low-down on live music in downtown Cape Girardeau March 3 and 4.

Saturday night is the hottest option with three shows at a few of my favorite establishments.

Four St. Louis bands will be getting down on Water Street at Ragsdales for the “Pop Punk Takeover” show beginning at 8 p.m. If you’re 21 or older, $5 gets you into see As We Are Now, Pure October, Name It Now and An Unfortunate Trend.

For those not yet 21, fear not, the Blue Diamond Club has your back. Grateful Dead Experience: The Schwag will play a $10 show that is 18 and up. The name of the band says all that needs saying about that event.

But let's get to the real action. The Rude Dog Pub will be raging all weekend with some of Cape Girardeau’s most relevant musicians. Three dollars at the door both nights. Three doll-hairs. Half the cost of your Starbucks.

Friday, March 2, Heet & the A.C.’s will be jamming a 50-50 mix of covers and original songs till closing time. The jam band is the solo project of Jason Heeter of Shugyo, a local group with a respectable following. Heeter said much of his passion has turned toward making music with this new group, an underground-style jam band, similar to Phish or the more contemporary Leftover Salmon. 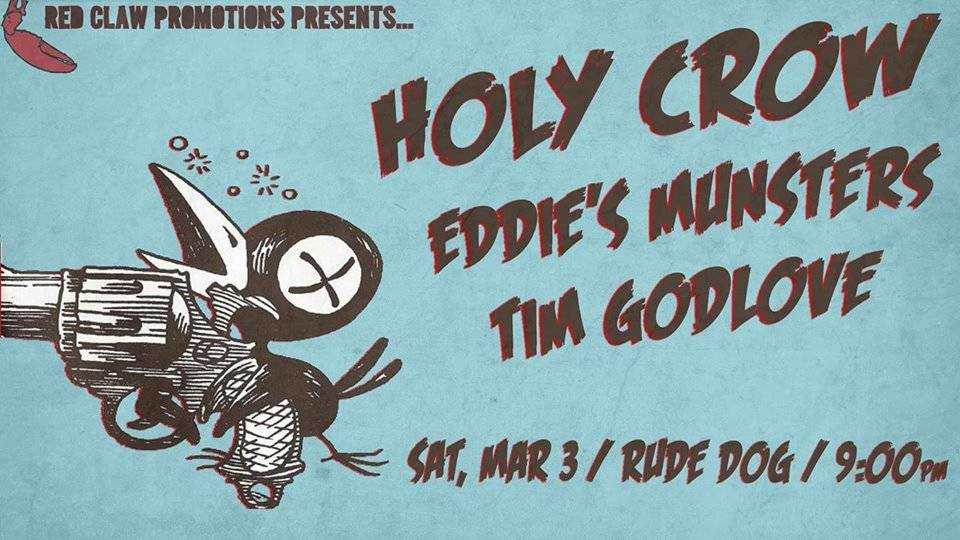 Marc Richey, Holy Crow’s guitar and vocals, said returning to the pub after a year of heavy gigging is the first full-circle experience on their journey, one they’d like to continue with a move to Clarksville, Tennessee, in the near future to record an album and try to book a national tour.

Richey is about 6-foot-5 and always smiling. He lives in Fredericktown but can usually be found in downtown Cape Girardeau when live music is about. When we spoke Monday, his excitement for the show was tangible through the phone.

“I truly believe it’s the best bar in Missouri,” he said. “Just knowing pretty much any weekend you can go pay $3 and you’re going to see some great music and just a lot of talent. It’s great that a venue has such a good draw. It’s one of those places where people don’t know what they’re getting into, they’re just going to come see some good music.”

Holy Crow hit the ground running last March after a video of their set at Ragsdale’s open-mic led to their first real show, opening for The Scatterguns at the Rude Dog.

“We decided we’re just going to cut our teeth, we’re going to do it,” Richey said. “Since then we’ve played St. Louis and Cape a bunch, a bunch of different venues and barbeques and birthday parties and wineries. We’re taking every opportunity we can.”

But after being booked at St. Louis’ Heavy Anchor twice in one week, Richey and drummer Travis England decided they had to do something different.

“We started facing each other head-on, like we do in our practices, and I don’t think we’ll ever do anything else. Being a two-piece we improvise a lot and find new spaces. Travis’ glasses always get fogged up and he’ll say, ‘You’re just a blurb, but I see the guitar go up and I know what we’re about to do.’”

England, the other half of Holy Crow, talks about playing the drums like preparing to run a marathon. Richey said he hits them so hard because they don’t know any other way to do it.

Richey said Friday’s event had nearly fallen apart before friends in high places came to the rescue; Godlove heroically agreed last-minute to fill a void in the line-up.

“When Tim Godlove does acoustic stuff people pay attention,” Richey said. “You know you’re witnessing something special, and he doesn’t need six people on stage to do it.”

Godlove’s willingness to lend his talents to the show is representative of the mutual respect that exists among musicians.

I seen that same supportiveness later that night in the guys from Heet and the A.C.’s on Ken E. Keller’s front porch. Heeter’s rhythm section is composed Frankenstein-style of hand-picked heavy-hitters moonlighting from their other bands: Keller, probably the giggingiest musician in town, plays bass and hosts rehearsals; Stan Denninger of The Tungsten Groove plays keys; and Tim Morrison of the Evan Webb Band cracking the drums. Heeter’s Shugyo bandmate Matt Gates, who Heeter called electrifying, will join the group on lead guitar Friday night.

Eyes closed in Keller’s soundproofed basement room, I couldn’t help but think similar sounds would have existed if the Rolling Stones had bummed around with Marley in the early 70s.

Heeter is a soft-spoken frontman with a rasp in his singing that leaves you wondering where it came from. His Jerry Garcia, “hot club jazz” riffs are chopped out with some healthy distortion on a blonde epiphone hollow-body.

Heeter said his search for music has been moving in reverse, towards old music instead of searching out new stuff. Merle Haggard and Little Feat, he said have become recent obsessions — Jimmy Page called the latter his favorite American band in a 1975 Rolling Stone interview.

As for what to expect from Heet and the A.C.’s, the guys said if nothing else — the beat will never falter.

“I think it’s the quickest ears playing in town right now,” Keller said. “Because we are making most of it up on the fly and it’s tight as can be. We’re going to alternate and do the relative minor. But it all ends up being the biggest ears in town really, because we’re listening to each other.”

Reader, I’d be amazed if you’ve stayed with me for this long, and I’ll repay you here by wrapping things up. As Heeter put it, the music scene is as good as we make it. Months ago in my na·ive·té I made the mistake of thinking it was lacking, and sure there’s always room for improvement, but guys like the A.C.’s and the countless other bands who organize and shatter faces at every weekend show, have been here all along, and they need lovin’ too.