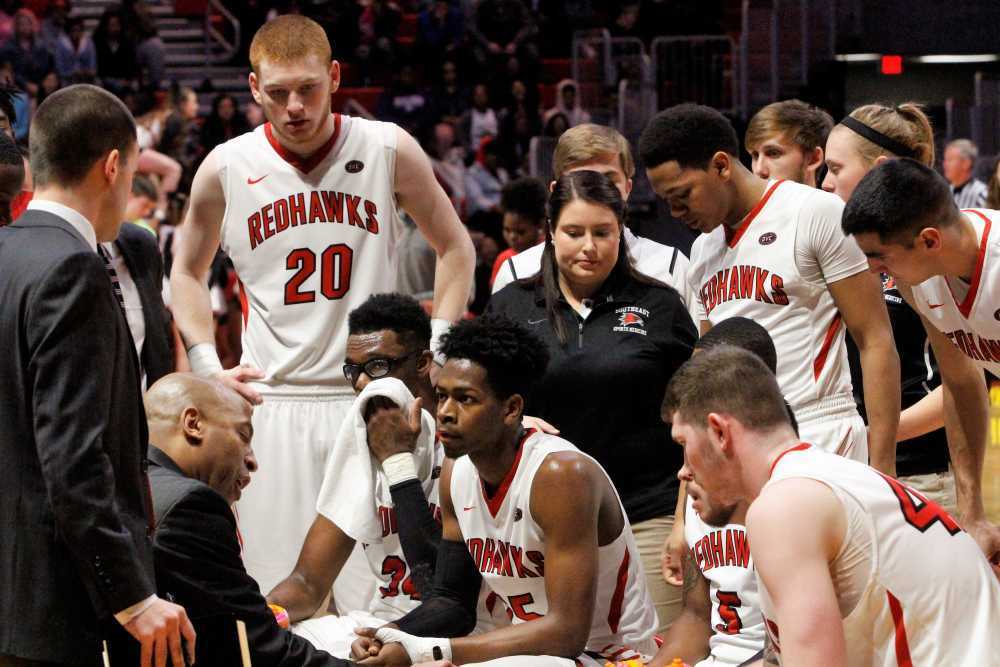 Coach Rick Ray outlines the next play of the game to his players during a timeout.
Photo by Joshua Dodge

“The future is bright for our upcoming team,” Ray said. “Since I do not see any other team returning more talent than us.”

Sophomore guard Denzel Mahoney is a major source of optimism after finishing his second season as first team All-OVC. A year after being named second team All-OVC and OVC Freshman of the Year, Mahoney averaged 19.3 points per game, 5.1 rebounds, and led the team in free-throw percentage of 83.5 percent. He was one of 10 players selected first team All-District by the National Association of Basketball Coaches.

Freshman guard Ledarrius Brewer was named to the OVC All-Newcomer team after averaging 14.5 points per game, 3.8 rebounds, 16 blocks and 29 steals. He also led the team in 3-point field goals made.

Southeast will be losing two seniors next year, Milos Vranes and Daniel Simmons, but already have signed a couple recruits for the upcoming season. The incoming class includes Alex Caldwell, a Class 4 all-state guard from Wilson High School in South Carolina, who signed in November. Caldwell, who just finished his senior year, was an ESPN top-30 guard after a junior just averaging 14 points, nine assists, five rebounds and 2.5 steals per game.

“I am looking forward to seeing the maturation of the whole team next season,” Ray said.

In the meantime, the men’s team have focused goals for each part of the game. On the offensive side, Ray wants them to ultimately take care of the ball. He wants them to be able to share, finish at the rim and make open 3-point baskets. On the defensive end, Ray’s biggest goal is to keep his men competitive. He describes his plan of action in five steps,

“First is to stay in front of your man at all times, then you want to constantly be talking to your other teammates and keep activity on the ball,” Ray said. “The most important is to be ready to help and already be in position to get a solid rebound.”

As Ray puts another season in the books, it is obvious that he is already planning for next year and getting his team ready to compete in the OVC.