Redhawks football brings home the Wheel with victory against SIU 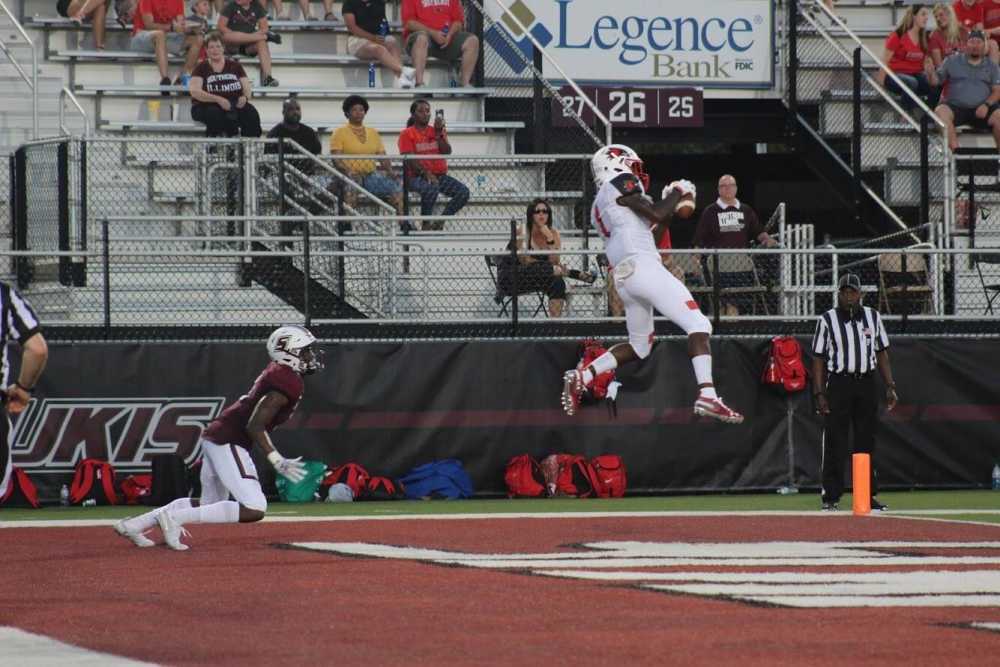 Senior running back Marquis Terry rushed for a career-high and Ohio Valley Conference record 311 yards and added four touchdowns in the Redhawks’ victory in the inaugural War for the Wheel, defeating Southern Illinois University-Carbondale in a back and forth battle 48-44 on Saturday, Sept. 15, in Carbondale, Illinois.

“[Terry] is unbelievable,” junior quarterback Daniel Santacaterina said. “He is one of the best players I’ve ever seen on a football field, he is so good.”

There was a total of 10 lead changes in the game, showing that the matchup was there for the taking the entire 60 minutes. The final lead change came with 25 seconds left when Santacaterina connected with redshirt sophomore tight end Austin Crump on a 14-yard scoring pass. 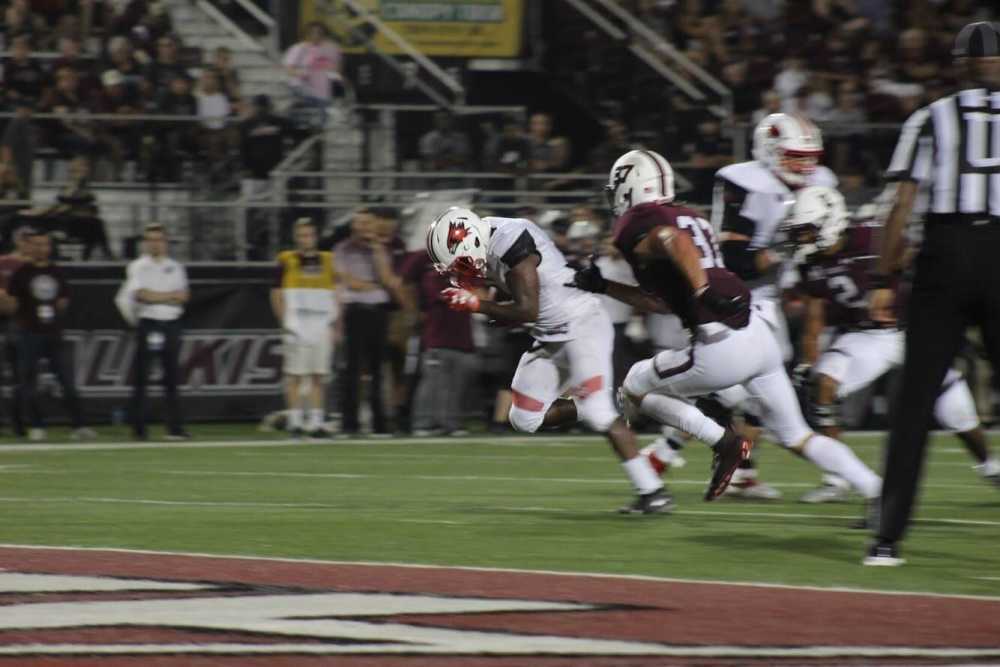 RB Marquis Terry stomps into the end zone for his fourth touchdown of the game in the RedHawks 48-44 victory at SIU-Carbondale Sept. 15.
Photo by Zach Tate ~Sports Editor

The Redhawks had their first takeaway of the night just three minutes into the game, when junior defensive back DJ Freeman intercepted SIU senior quarterback Sam Straub at the Southeast 9-yard line. 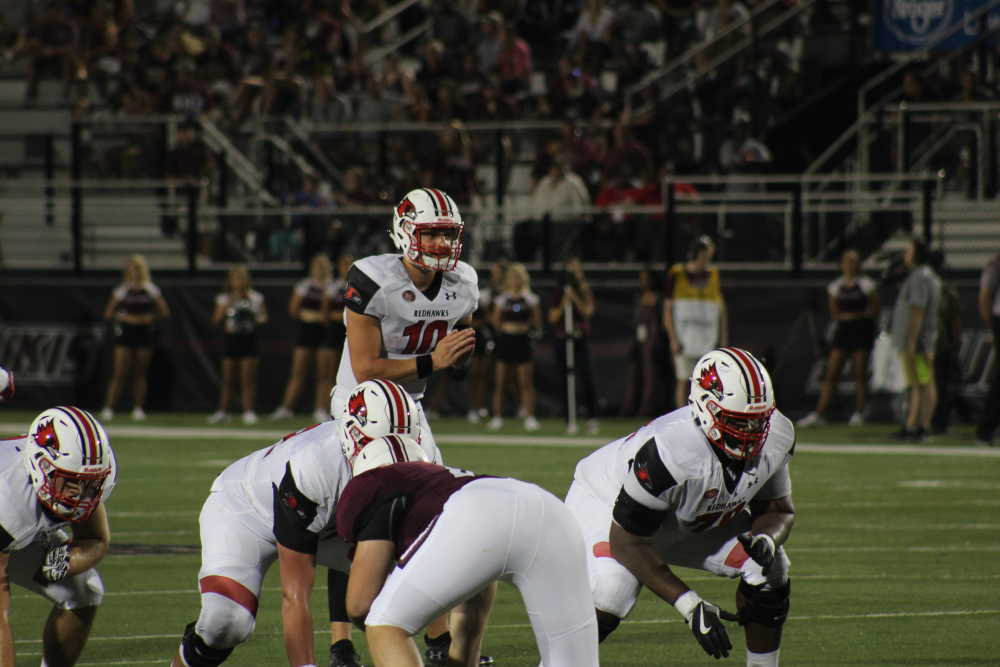 Southeast’s offense got on the board on a Santacaterina throw to Crump for a seven-yard touchdown pass to cut the deficit to 10-7 with 2:25. This reception was Crump’s first career catch.

“I’m just out there to do my job,” Crump said. ”If they throw me the ball, then I get the ball. Other than that I’m just out here to help the team win. It doesn’t matter who scores, as long as somebody scores, that’s all that matters.”

It did not take long for Southeast to add another touchdown. Straub had his pass tipped high into the air and intercepted by junior inside linebacker Zach Hall. A few plays later, Terry broke loose on a 74-yard touchdown run, giving Southeast their first lead of the game, making it 14-10 with 1:09 left in the first quarter. 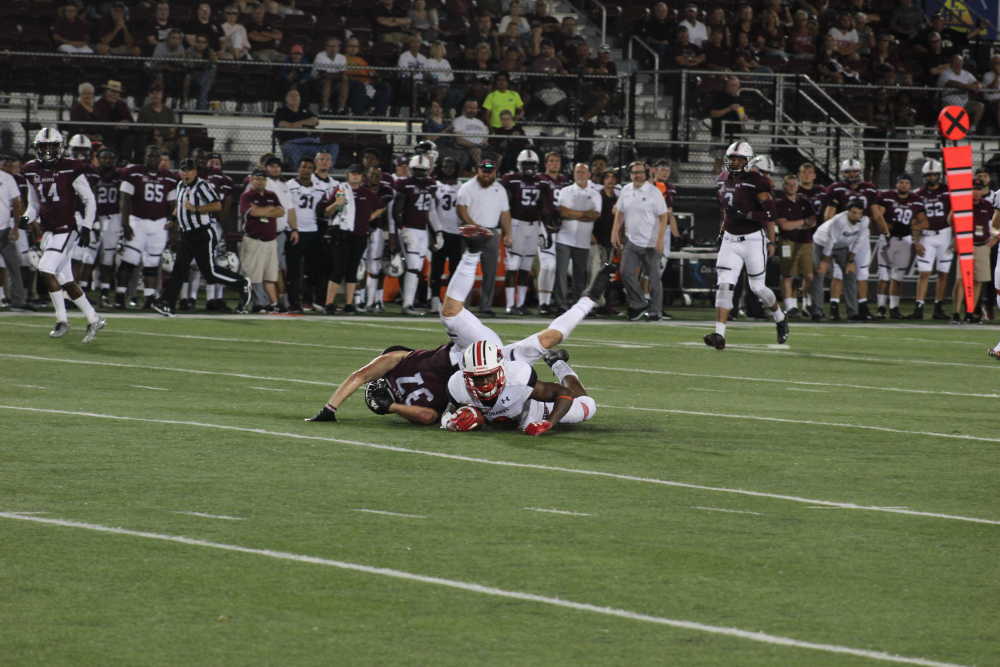 Senior running back Marquis Terry gets tripped up in the fourth quarter, but not before getting the first down.
Photo by Zach Tate ~Sports Editor

Southeast junior cornerback Al Young started off the second quarter with an interception, one of three by the Redhawks.

“[Those interceptions] are a big sudden change,” Southeast coach Tom Matukewicz said. “We got 14 points off of those. And then they roughed the punter, which is like a sudden change. It was a big part of the first half.”

SIU scored twice in the second quarter, the first on a four-yard touchdown rush by junior DJ Davis with 9:53 left in the half. Six minutes later, the Salukis tacked on a field goal for a 20-14 advantage.

The Redhawks then marched down the field to score a field goal to close the gap and finish the half down 20-17. 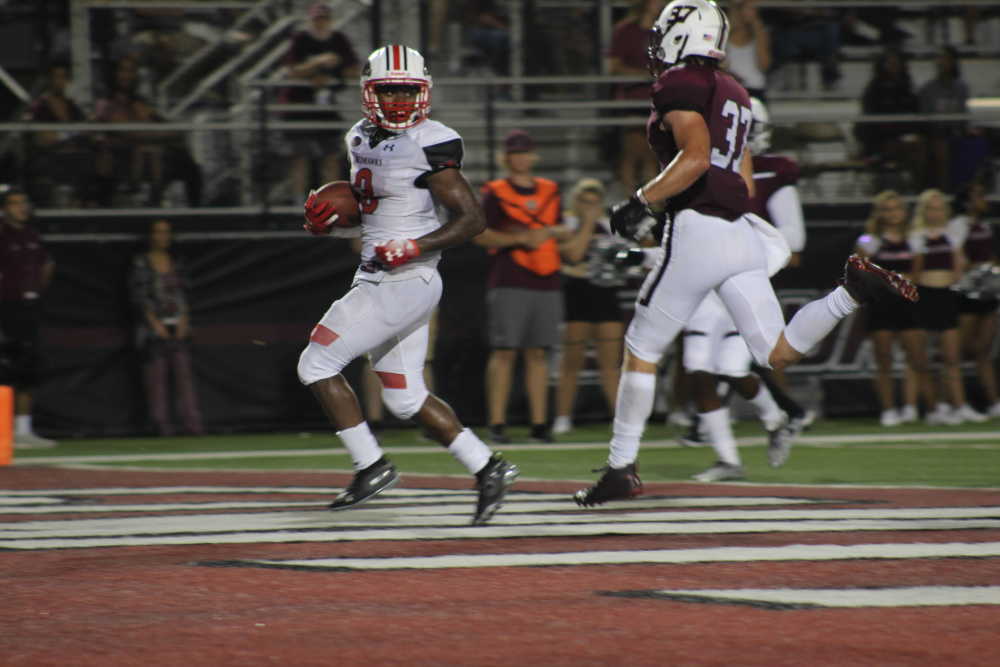 Senior running back Marquis Terry scores his fourth touchdown of the game against SIUC, after rushing for 311 yards, an OVC record.
Photo by Zach Tate ~Sports Editor

The Redhawks kicked off to start the second half, but a fumble by the Salukis was recovered by Southeast, giving the offense possession at the SIU 29 yard line. Two plays later, Terry scored on a 23-yard run to put the Redhawks up 24-20.

The Salukis responded with a long drive down the field that resulted in another Davis touchdown, putting them ahead 27-24.

On the following possession, Santacaterina rushed for a 26-yard gain, and threw a 34-yard pass to junior Jerrick Orr. This sequence set up Terry for his third touchdown run of the night, a 11-yard run, and to put the Redhawks back in the lead 31-27 with 6:15 left in the third quarter.

The Redhawks defense forced the Salukis 3-and-out, and drove down the field to set up a 38-yard field goal to make the score 34-27 heading into the fourth quarter.

SIU again responded with two back-to-back scores, kicking a field goal just 10 seconds into the quarter, and later scoring on an eight-yard pass to Saluki senior Raphael Leonard for a touchdown to give SIU a 37-34 lead with 8:11 left in the game.

Southeast drove down the field, and with just 4:25 left in the game, Terry scored his fourth touchdown of the night, a 10-yard rush to put the Redhawks on top 41-37.

The final drive by the Salukis featured two successful fourth-down conversions. The first was successful due to an illegal substitution call, and the second was converted on a 1-yard rush by Straub. The drive ended on an eight-yard touchdown pass to Leonard with 1:45 left in the game giving the Salukis a 44-41 lead.

Santacaterina was intercepted on the first play of the ensuing drive, but the Redhaks were given a reprieve when the Salukis were called for a roughing-the-passer penalty. Santacaterina then drove the Redhawks 61 yards down the field, completing three-of-five passes, finishing the game off with a 14-yard strike to Crump, giving Southeast the 48-44 lead for the final time with 25 seconds left. The Salukis had no response.

“I think the biggest thing is learning how to win. First thing is, you have got to believe. I felt the sideline the whole game. Up or down, we believed we were going to win that game.”

Matukewicz said the two-minute drive like the offense had in the fourth quarter was amazing.

“I just think it’s going to give us even that much more belief, the fact that we could do it at the end,” he said.

Straub led the game in passing yards with 338 on a 27-43 clip, and he tacked on two touchdowns for the Salukis. Santacaterina led the Redhawks with 179 yards on 18-31 passing, also adding on tw

The Salukis had more total yardage in the game, finishing with 547 yards of offense to the Redhawks’ 531.

Leonard was the leading receiver for the Salukis with 11 receptions for 124 yards and two touchdowns. Sophomore Zack Smith and junior Kristian Wilkerson led Southeast with four receptions each, for 36 and 43 yards, respectively.

In addition to his rushing feats, Terry added 13 yards in the air and 114 yards on returns, breaking the OVC all-purpose yards record for a single game with 438.

It marked the first time Southeast beat SIU since 2015. The Redhawks (2-1) will play Eastern Kentucky on Saturday, Sept. 22, in Richmond, Kentucky. Kickoff is set for 3 p.m..