Faculty member Diane Wood and others from the department of biology express their concerns to President Vargas following his annual state of the university address at Academic Hall Sept. 27.
Photo by Matt Dollard ~ Editor

Southeast president Carlos Vargas outlined past and present efforts to move the institution forward during his State of the University address Sept. 27 at Academic Hall to some 100 university employees and at least one student.

Vargas outlined the university’s 2014 strategic plan and highlighted some of the efforts to align with it. He said Southeast’s 34 program-specific accreditations and certifications place it as one of the top two institutions in Missouri.

One key announcement of the address was the lowering of health insurance premiums for employees by half of one percent, with no plan design changes, in FY19.

“For the last several years, we have had to deal with significant increases in the cost of employee benefits,” Vargas said. “I am pleased to say that in 2019 that will change.”

Vargas said further reducing these costs is a priority. In addition to the .5 percent reduction in premium cost for family health care, those who elect for dental coverage will see a reduction of 3 percent and there has been an average 10 percent reduction in the cost of premiums for vision care. Additionally, the $250 state-allowed “Cafeteria Rate” will remain intact through FY19 due to savings identified in recent months. That amount can be used to offset the costs of employee and dependent health, dental and vision insurance premiums or to fund a health savings account (HSA) or medical reimbursement account (MRA).

“Our budget essentially has been shrinking, now at least, not only are those [premiums] staying fixed but actually they’re being reduced,” Vargas said. “So their contributions, what they have to pay for healthcare, vision and dental, is going to go down a little bit. Not too much, not too much, but at least it’s not going up.”

Additionally, Vargas touched on the retainment and graduation rates, both down from last year.

Student retention rate stands at 74.4 percent according to Vargas, compared to 75.1 percent at this time last year. Graduation rate now stands at 48.8 percent, he said.

Vargas said he believes the continued implementation of Support NET (a new web platform that connects students with advisors and department chairs, etc.) and attention to students by demographic, such as gender and ethnicity, will improve these numbers.

He said male students consistently underperform their female counterparts, and African American and Hispanic students do not compare as well to students of other ethnicities.

“These facts are troubling to me,” he said. “As a University community, we must aspire so all students will persist and graduate on a timely basis from this university, regardless of race, ethnicity, family income, gender or program of study.”

Diversity and inclusion, Vargas said, will be another continued priority, with a goal to match Missouri’s 19 percent minority population (according to a 2010 census).

“If we truly want to be a place where everyone feels welcome and appreciated, we should be reflective of state populations,” he said.

Vargas spoke about the FY18 budget cuts by former Governor Eric Greitens, noting that the impact was significant. While all of Greitens’ proposed cuts did not go into effect, Southeast’s operating budget for FY19 was decreased by more than 2 percent. The Board of Regents approved an operating budget of $114 million in June, down from $116.5 million the previous year. There have been no pay raises for more than a year.

“As the months progressed, this campus was forced to have conversations that were difficult and for some, life changing,” he said. “The decisions we made were not easy. As a result, many of you have been asked to help move the institution forward, despite taking on additional responsibilities and - or working with fewer colleagues. I know it has not been easy for you.”

Vargas said although he is not happy with all of the decisions made, he is proud of the way the adversity was handled.

He concluded the speech with a quote from Albert Einstein: “In the middle of difficulty: lies opportunity.” 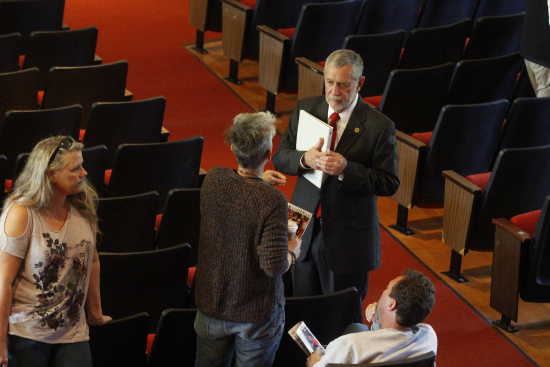 Southeast president Carlos Vargas delivers his annual state of the university address on Sept. 27 at Academic Hall to some 100 employees of the institution.
Photo by Matt Dollard ~ Editor

Southeast president Carlos Vargas’ announcement that health insurance premiums would be slightly reduced in FY19 was met with a warm applause from the university employees in attendance.

Brooke Hilldebrand-Clubbs, instructor and director of health communications said in an interview following President Vargas’ State of the Union address, this news was exciting because premium increases are “across the board” regardless of salary. When premiums go up, as they have in the past, it affects faculty and staff at different rates, she said.

“It’s like getting a pay cut for us, because we haven't gotten raises in a while,” she said. “Finding out that those are going down, that was very good news for me as a staff member.”

She said that insurance premiums have been increasing for as long as she can remember and a decrease of any size is better than that number going up.

“For some of us that’s a bigger sigh of relief,” she said.

Clubbs said she was delighted to hear that there would be a renewed focus on demographics and reasons for underperformance in males and lower graduation rates for some minority students.

“I’m really glad that we are going to look at that, and really try to develop some concrete action plans,” she said.

There were others in attendance who approached Vargas immediately following his address, to express their concerns.

One of those, professor of biology Diane Wood, said in an interview the next day, that her department, one of the largest on campus, has been without an administrative assistant since May due to a lack of money. She said retaining university employees should be a priority of the upper administration.

“Faculty, students, people that maintain buildings and keep offices running are the very foundation of this university,” Wood said. “Without them we don’t have ancillary support.”

Wood noted her time in leadership of faculty senate and relationship with a variety of people around campus, and said that a number of employees feel “stretched beyond their abilities,” and are less able to excel in their positions as a result.

“The employees at this university are demoralized and distrusting of the upper administration,” Wood said.

Wood called the restructuring process and subsequent changes “surgery with a bowie knife,” and said that finalized decisions did not reflect the input and feedback that was requested from employees, and did not prioritize academics.

Another professor of biology, Allan Bornstein, said in the same interview, that student retention rates are directly related to the resources made available to faculty.

For students, Bornstein said, the question should be “Am I getting what I came here for and what I’m paying for, in the classroom?”