Men's basketball set to start season on the road 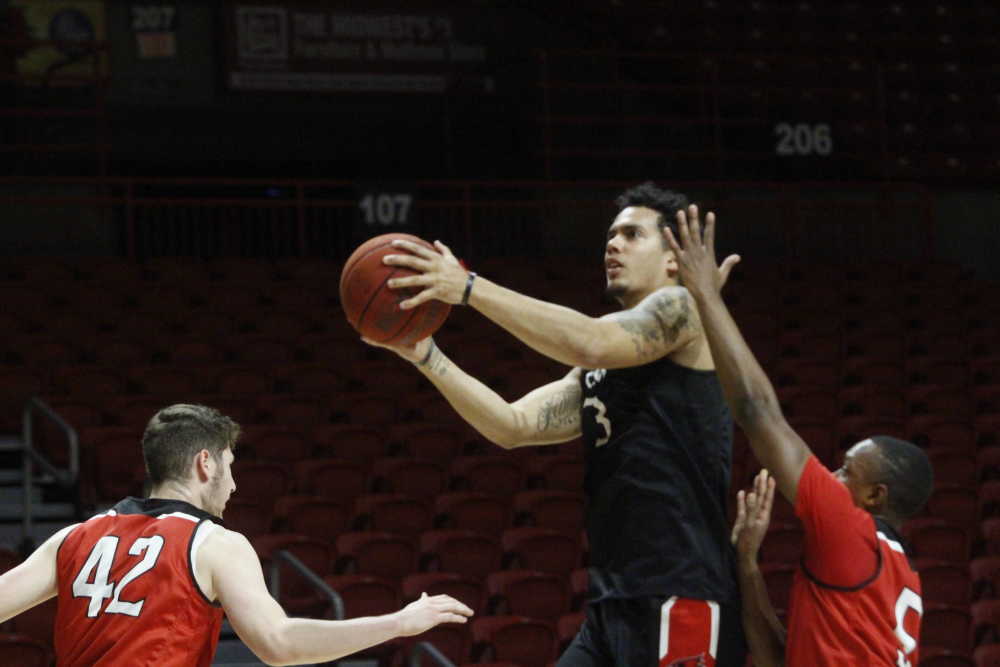 Skylar Hogan goes up for a lay up during practice on Oct. 17.
Photo by Joshua Dodge ~ Photo Editor

The Southeast menĺs basketball team will travel up the Mississippi to take on St. Louis University on Nov. 6 to open the season, with nine of 15 players on the roster having never seen Division I action.

Southeast had three starters transfer after last season, including First Team All-Ohio Valley Conference and leading scorer Denzel Mahoney. Even with the loss of Mahoney, Southeast coach Rick Ray feels the team is set up for success this season.

ôThis is probably our most talented team from top to bottom since I got here,ö Ray said. ôWeĺre practicing at seven oĺclock in the morning, and our guys come in here, and theyĺre not sleep walking. They come in here ready to compete, and thatĺs all you can ask for.ö

Last season, the team was prohibited from participating in the postseason, and was mandated to shift four of its 20 weekly practice hours to academic and retention efforts. These restrictions were in place because of the teamĺs four-year Academic Progress Rate score. The Redhawks will enter this season with zero practice restrictions and eligible for postseason play.

Among the leaders on the team is returning senior point guard Jonathan Dalton, who started 30 games last season. He led the team in minutes (32.2 per game), assists (5.4 per game) and steals (1.27 per game). Dalton ranked third in the OVC in assists, ninth in steals and 13th in minutes played.

Dalton has been vocal on the team, on both ends of the court. He said one improvement the team can make is in the area of consistent communication on defense.

ô[Practices] have been awesome,ö Dalton said. ôI think, since my first year here, this has been the best, no doubt. I donĺt think weĺve had a quiet practice yet. Last year, we were inconsistent and we would come into practice and start off slow. Every practice this year the energyĺs been there, and guys are locked in and focused. The competitiveness has been the best.ö

Redshirt freshman Kahlil Cuffee noticed a definite change in atmosphere from last season to this one.

Cuffee also noted how competitive the practices have been, and how players banter.

Dalton believes the biggest obstacle for the Redhawks this season is inexperience.

Even with the inexperience, Ray voiced confidence in his teamĺs ability to win games.