Percussion Ensemble rises to the occasion at fall concert 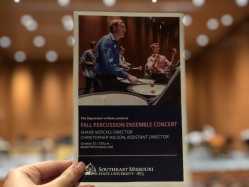 Percussion ensemble starts of the year with their first performance in their fall concert.
Photo by Hailey Hampton ~ Arrow Reporter

The Percussion Ensemble performed in their fall concert Tuesday, Oct. 23, featuring both ensemble and chamber music.

Southeast junior Alisah Coots, majoring in music education, played in seven out of eight of the songs, mostly on the marimba. Coots was one of three women in the ensemble, but the only woman who played in the majority of the songs.

“I’ve always been the only girl percussionist until college,” Coots said. “It was never awkward for me because I grew up with all boys.”

Coots has been a percussionist since she was 7 years old. Her freshman year of high school was when she knew she would be partaking in music for a long time.

“Without music, I would not be myself at all,” Coots said. “Music is my everything.” 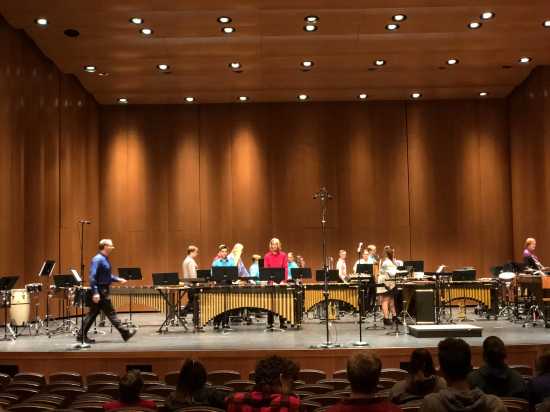 The ensemble and director walked out on to the stage to start their first performance of the year.
Photo by Hailey Hampton ~ Arrow Reporter

Five out of the eight songs were played as chamber numbers, which means in this concert only four to five people played, typically without a conductor, while three songs were performed by the entire ensemble.

They started off the night with the ensemble piece “Sweet Rio,” composed by Arthur Lipner and arranged by David Steinquest. Chamber pieces followed.

The first chamber number was “Escape Velocity” by Dave Hall, in which director Shane Mizicko played alongside the students.

In the third piece, “Adventures of Ivan” by Aram Khachaturian, originally written for piano, was played on four marimbas.

“The marimba wasn’t invented for awhile, but a lot of music sounds great on the marimba, so we ‘steal’ music,” Mizicko said.

The entire ensemble returned to the stage for their fourth piece, “Ritmica 5 and 6” by Amadeo Roldan.

The fifth piece featured a chorale, “An WasserFlussen Babylon,” by J.S. Bach This piece was directed by assistant director Christopher Wilson. This song was originally written in a soprano, alto, tenor, bass fashion, but the percussionists portrayed it in their own way.

The final marimba chorale piece, ”Unity” by David Gillingham, was layered with harmony.

“Chamber music is the heart and soul of percussion,” Mizicko said. “The members said that the hardest part was communication, and it was in six count rather than four count, which can be difficult for percussionists.”

Southeast junior Kersten Berry, also a percussionist, but not in the ensemble, said “Red Earth” was her favorite piece.

“I like coming to these events because it’s different being a percussionist and watching other percussionists perform,” Berry said.

The final piece was “Mercury Rising” by Nathan Daughtrey. In this piece, there were moving parts, mallot changes, instrument changes, and then the ensemble came back together and played the same parts.

The ensemble is typically seen with the Steel Drum Band, but their Steel Drum Band’s next performance will be “Sounds of the Season,” Dec. 2 at Cape First Church.

The ensemble’s next performance will be the Family Holiday Concert on Dec. 8 in the Bedell Performance Hall.