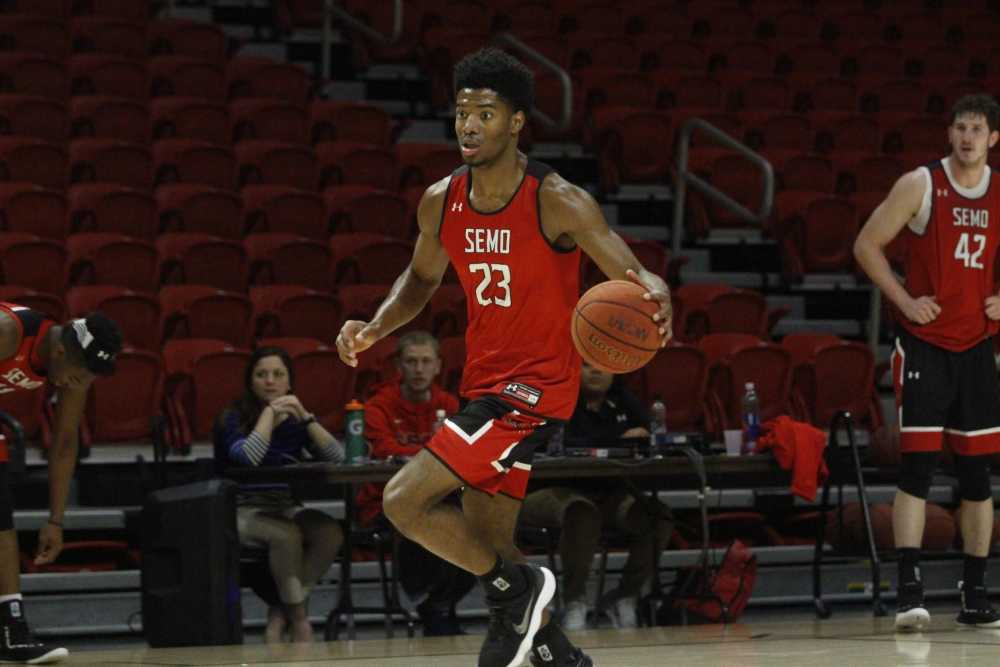 The Southeast men’s basketball team got its first taste of competition when it defeated Southwest Baptist 85-78 in an exhibition game Saturday, Oct. 27, at the Show Me Center.

The Redhawks got off to a slow start to begin the game, with Southwest Baptist jumping out to a 19-12 lead at the under 12 minute media timeout. The turning point in the game was when Ledarrius Brewer gave the Redhawks a 39-38 lead at halftime by launching a half-court shot as time expired.

The Redhawks were led by Brewer, with 25 points on 6-of-11 shooting from the field, and chipped in 10 of his points from the free-throw line. Southeast made eight consecutive free throws in the final 1:51 to seal the game.

The Redhawks finished the game 27-of-35 from the charity stripe. The Redhawks had a lot contributions from freshmen. Leading the way was Caldwell with 12 points (5-for-6) . McGlothan added 10 points and nine rebounds and Russell also chipped in 10 points off the bench.

“Gabe [McGlothan] has been really consistent with rebounding. He did a really good job on the boards for us,” Ray said.

The Redhawks have a lot of new faces on the court this year. Two of the five starting Redhawks, freshman Sage Tolbert and junior Skylar Hogan, were seeing their first action in a Redhawks uniform. Some of the younger players contributed to the game early, with the freshmen Alex Caldwell and Gabe McGlothan scoring back-to-back layups to give the Redhawks a 33-29 lead with 3:11 remaining in the first half.

The Redhawks stretched the advantage to nine points, 55-46, over the first 7 minutes, 15 seconds of the second half.The Redhawks’ largest lead of the game came off a 3-pointer from Hogan to give the Redhawks a 64-51 lead with 8:59 remaining in the game.

“I thought the first stretch of the second half, the first 12 minutes we were really, really good on the defensive end,” Southeast coach Rick Ray said.

Down the stretch the Bearcats fought their way back into the game, getting a big 3-point shot from senior Karim Mouliom to cut the Redhawks lead to 75-74 with 1:43 remaining in the game.

The Redhawks played a number of guys who saw their first action in uniform, including Caldwell, McGlothan, Russell, Hogan, Tolbert, and sophomore Oscar Kao.

This was the only exhibition for the Redhawks, as they look to start their season Tuesday, Nov. 6, on the road against Saint Louis University