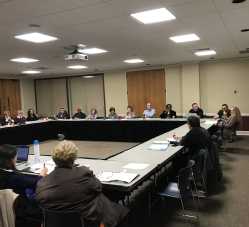 With recent changes made to the academia, many faculty members still expressed concern and confusion over how to proceed at the faculty senate meeting on Oct. 31. Faculty assembled to talk through several affairs Wednesday evening in the Redhawks Room in the University Center.

As a part of “new business” on the agenda, senate chair David Powell opened the meeting addressing a faculty poll that was recently issued as an effort to “draw together lots of feedback as to what is the problem [communication and faculty morale] as they are perceived.” Powell said when he reached out for suggestions, concerns were either vague or repetitive.

Senator of accounting, economics and finance Roberta Humphrey countered Powell’s comment on repetitiveness, saying she read many different comments on the poll from faculty regarding issues like workload and the rearrangement of credit hours.

Humphrey then alluded that faculty’s complaints and suggestions about how to resolve issues are not being taken into attentive consideration. She said faculty chairs seem to have resolutions in mind before reaching out to other faculty for remarks.

Alternate senator of communication studies and modern languages Debra Lee-Distefano agreed with Humphrey. She also pointed out patterns she was noticing with some of the suggestions.

“What we’re seeing is no different than what we’ve seen in previous surveys from faculty,” Lee-Distefano said. “So what we have to see is what is it that we have consistently not been doing.”

She said there should be a process to legitimize faculty’s concerns because until that is implemented, “no one can really come forth with suggestions because, to whom do they go?”

She then brought up confusion about what faculty’s role is in the decision-making process, which led her to the issue of shared governance. Shared governance is essentially a set of guidelines on the roles and duties of all faculty and staff. In order for faculty to be involved in the decision-making, Lee-Distefano said, they need to be well-informed, to determine what effects may come of a decision.

“From one perspective, what seems to be a good idea, may have worse ramifications,” Lee-Distefano said.

The recent reorganization of colleges at Southeast still bares resentment from some faculty, Powell said. The restructuring, which took effect Aug. 1, was the result of a statewide budget cut that cost Southeast $566,708 in reduced salaries and benefits. Colleges at Southeast have gone through restructuring in previous years, but because of the impact this specific change has made, Lee-Distefano said more people are paying attention.

Part of the issue is not being vocal and straightforward about why things are happening the way they are, Lee-Distefano said.

Some faculty recalled initial feelings of aloofness when it came to when and how the restructuring would be implemented. Powell opened the floor to faculty for comments on the matter.

“Either we need to go back to what we had before, or we need to make people understand why that change was integral in this institution,” Humphrey said.

The rearrangement has caused adjustments in course loads for faculty, and associate professor of biology Dustin Siegel, talked about how the adjustments were not communicated efficiently.

“We’ve been told forever that this is an equitability thing,” Siegel said. “And then eventually the president said this was a financial decision. At no point have I been told that.”

Although it was not directly communicated, Siegel said he always assumed there was an underlying reason for the decision to reorganize the colleges.

“If it’s a financial thing and we have to do it for financial reasons, that is completely different than, ‘We’re doing this for equitability, even though this screws you guys,’”Siegel said. “Wouldn’t it be nice to show the faculty the numbers and how this helps us financially?”

Siegel also said he had not heard about the administration declaring the change a financial decision until just last week. He attributed his lack of awareness to miscommunication.

In the midst of faculty voicing their concerns, interim provost Tamela Randolph offered a different way to view the situation.

“Maybe everybody’s not happy,” Randolph said. “But I would hope we’re closer to people feeling like they’re getting something fair out of it.”

She said she has talked with Southeast president Dr. Carlos Vargas in the past regarding these matters, and that to revisit them may not be beneficial.

“I don’t know that going to each department and hearing all the faculty is a good idea at this point. Again, I’m not sure that serves a purpose,” Randolph said. “I think we need to realize that any decision that was made, isn’t necessarily a final decision.”

The senate reversed their Dec. 5 meeting to Nov. 28 to invite Vargas to a meeting. This would be an opportunity for faculty to “hear what he identifies as important and how he would suggest moving forward,” Powell said.