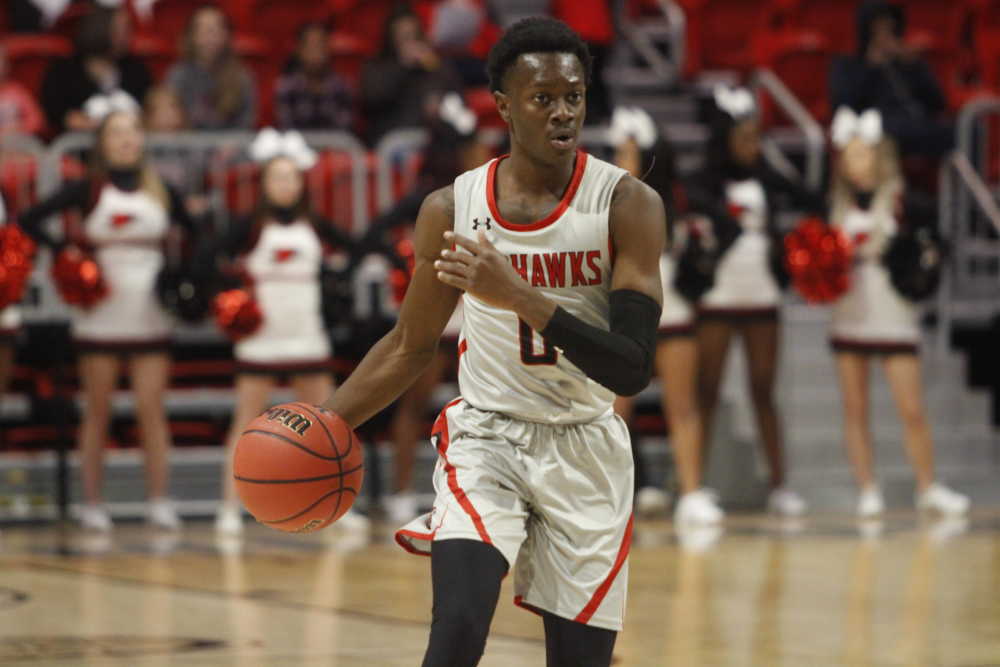 Freshman Alex Caldwell was the lead scorer of the game. He scored 15 points against Quincy all from the three point range.
Photo by Joshua Dodge ~ Photo Editor

The men’s basketball team returned home for its first home game against the Quincy Hawks at the Show Me Center and dominated the visitors from start to finish, winning 102-66.

Heading into the game, Ray preached tougher defense and consistency on the other end of the floor.

“We had given up 74 points in our last two games off of just second-chance points and points off our turnovers,” Ray said. “We had a negative assist- turnover ratio, so we wanted to make sure we turned those things around.”

The Redhawks outscored the Hawks 53-32 in the first half.

“I was really proud of the way our guys started off the game by buying into that defensive mindset, and then you can see the fact that they were really sharing the basketball and continuing to do that throughout the beginning of the first half,” Ray said.

Caldwell made four 3-point shots in a row that gave Southeast a 20-point lead with five minutes remaining in the half.

The South Carolina native acknowledged his first-half performance, and said he felt like his success was attributed to not only his teammates, but also patience.

“For me, it’s just playing the game, being patient, getting my teammates involved,” Caldwell said. “They then get me involved and make me a better player.”

Ray had high praise for his freshman point guard.

“Alex has a lot of confidence for a freshman, however, being confident does not mean you are a good player. However, he not only has confidence, but he is a good player, and we saw that today,” Ray said.

In the second half, Southeast extended its lead to 30 points with 10 minutes left after two free throws by freshman Nygal Russell.

Cuffee scored all 12 of his points in the final 10 minutes of play, including a layup that increased the point total to 100, a plateau the Redhawks reached for the first time since they scored 118 against Murray State in 2014.

Other players who stood out in the second half were Laros with eight points and Russell with seven points.

“It was a great performance for the team and everybody individually,” Brewer said. “We put together plays today. We played defense, offense and just made everything click.”

Southeast improved to 1-2 and will head to Mobile, Alabama, for the South Alabama Tournament where they will first take on the Jacksonville Dolphins on Nov. 16.