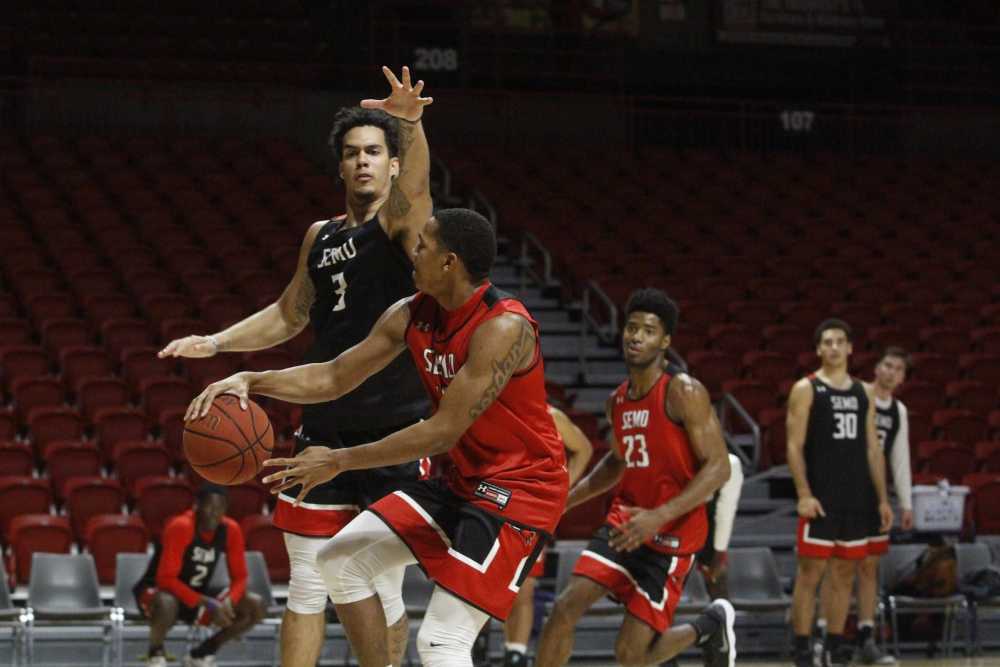 The Southeast men’s basketball team finished the Goldie and Herman Ungar Classic at the Mitchell Center on the campus of South Alabama with wins in its first two contests before closing with a loss to the host. The Redhawks(3-3) picked up their first win this season over a Division I opponent when they defeated Jacksonville on Friday, Nov.16. The Jacksonville Dolphins, Chattanooga Mocs, and South Alabama Jaguars were the three other schools competing in the tournament.

Game 1 vs. Jacksonville W (77-71): Freshman Alex Caldwell led the team on Friday with 17 points on 5-of-6 field goals and also went 3-of-3 from 3-point range, while adding four rebounds and two assists. Sophomore Ledarrius Brewer chipped in 16 points, six assists and seven rebounds and redshirt-sophomore Skylar Hogan added 14 points and seven rebounds. Southeast trailed 62-60 with 6:38 left in the game when it went on a 5-0 run to take the lead for good. A layup by Mark Laros tied the score at 62-62 and Caldwell put the Redhawks ahead with a pair of free throws with 5:45 remaining.It was part of an 11-2 burst that put the Redhawks in control. The Redhawks had a 33-32 lead over the Dolphins at halftime. Southeast outscored the Dolphins 16-3 from the free throw line.Hogan squared off against his older brother Jace Hogan, who led the Dolphins with 18 points.

Game 2 vs. Chattanooga W (66-42): Skylar Hogan was one of two Redhawks that had double-digit points on the night, leading with a career-high 15 points and shooting a perfect 3-of-3 shooting behind the 3-point arc. Ledarrius Brewer was the other Redhawk in double figures with 11 points and seven rebounds. Once the Redhawks took a 9-8 lead with a slam dunk by Brewer five minutes into the first half, they never gave up the lead. Southeast’s largest lead of the game was 27, when they led 61-34 with just over a minute left in the game. The win extended the Redhawks’ winning streak to three games. The victory also gave the Redhawks a 2-0 record in the Goldie and Herman Ungar tournament through Saturday.

With Hogan’s 14- and 15-point games, he received Ohio Valley Conference Newcomer of the Week honors.

The Redhawks will next be in action when they return to the Show Me Center to host Missouri S&T on Tuesday, Nov. 27 at 6:30 p.m.