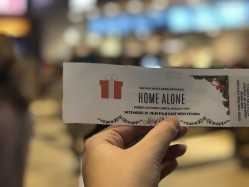 Students received special slips of paper to grant access into the movie.
Photo by Hailey Hampton

Thanksgiving passed, Black Friday deals have been made and now the Christmas season is underway. Southeast students got another good deal though, as Student Activities Council hosted its annual free holiday movie.

The classic Christmas comedy “Home Alone” was shown at the Cape West movie theater at midnight on Thursday, Nov. 30, where four screens were rented out and students were welcomed with free admission, popcorn and drinks.

Students were also provided with transportation. Shuttles picked students up at 11 p.m. and 11:30 p.m. from Towers and the University Center Starbucks.

At the theater, students stopped at a table to show their IDs and get their slips of paper allowing them entry to the movie as well as free popcorn and a drink.

Student Activities Council president Anthony Pulliam found that having the movie at this time of year is part of holiday fun but also as a de-stresser before finals.

“We have a week and a half until finals and everybody needs something fun to do but also relaxing at the same time,” Pulliam said.

Freshman Maria Bouche attended the movie as a way to get away from the stress of finals.

“Finals are super stressful and everything keeps piling up,” Bouche said. “You need a night to relax and be with friends to come back fresh.”

Amber Halloran is a senior who will be graduating this month, and she has been primarily focusing on graduation. Her purpose for going to the movie was to get away from the grind.

Jacy Keller is also a senior, and needed a break from the stress that comes with the end of the semester.

“Christmas is my favorite time of year and I hate finals,” Keller said. “This is my getaway from studying time.”

After the movie was over, the shuttles came back to pick up the students. Due to the late hour they were dropped off at each of the dorms.