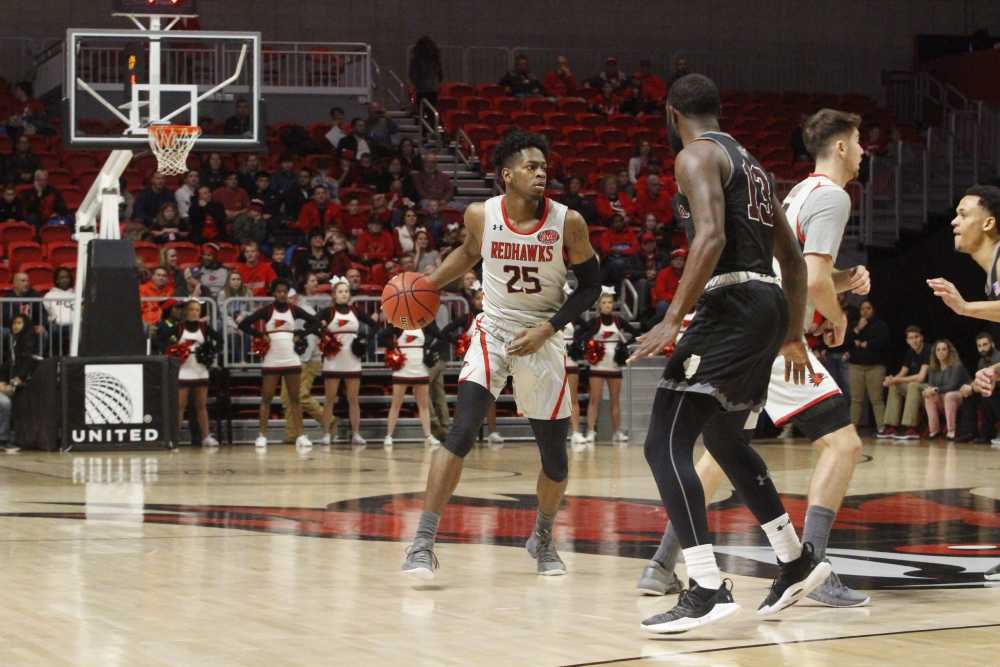 Sophomore guard Ledarrius Brewer comes off a screen and surveys the court during an 83-73 loss to SIU on Dec. 8.
Photo by Joshua Dodge ~ Photo Editor

The Southeast men’s basketball team committed a season-high 23 turnovers and endured a late scoring drought in dropping its fourth straight game, a 70-68 loss to Abilene Christian on Friday, Dec. 21, at the Show Me Center.

The score was tied a total of 10 times and the lead changed 21 times in the nailbiter.

“We have got to be better as far as just calming down,” Southeast coach Rick Ray said. “I thought we made some good plays, but once we got into that paint we made some really poor decisions about passing the basketball. I just think we got sped up in our decision-making.”

Four Wildcats scored in double figures, led by senior forward Jaren Lewis with 19 points on 7-for-10 shooting. Junior center Jalone Friday caused plenty of trouble for the Redhawks with 17 points and disrupted shots on the defensive end all night, finishing with five blocks.

“With shot-blockers, you have just got to go through them. And if you can’t go through them, you have got to pump fake, get them in the air and kick the ball out,” Ray said. “So if you have five blocks, that means that we had an opportunity to kick it out five times.”

For the second straight game, Southeast (5-8) finished with over 10 3-pointers, hitting 11 of 24 attempts, good for a healthy 46 percent. Two of those 3-pointers came late in the game as redshirt-junior guard Skyler Hogan and senior point guard Jonathan Dalton hit big shots to try to close the gap in the final minute.

Around the six-minute mark, sophomore guard Ledarrius Brewer took a feed from Dalton and slammed it home to give Southeast a 56-55 lead, but the team would only score two points until the final minute of the game. ACU went on a 10-2 run over that span to take a 65-58 lead.

“Shots wasn't falling for us, and we kind of tried to play hero ball and that made for some of the turnovers too. [We were] just trying to do too much,” Dalton said. “We just can't have those mental lapses at the end of the day.”

ACU (10-2) entered the game 11th in the country with a plus-5.3 turnover margin, and displayed that strength against the Redhawks. Southeast finished with 23 turnovers, a disappointing number after only committing 11 against No. 11 Florida State four days earlier.

“You look at the statistical categories, we beat them in pretty much everything, but obviously, the two things that stand out are we sent them to the free-throw line way too much,” Ray said. “I know some of it was at the end, so it's a little skewed in that regard, but 23 turnovers… when we turn the ball over that many times you just aren't giving yourself a chance to win.”

Brewer once again led the team in scoring with 15 points on 6-for-11 shooting, but he also committed a team-high five turnovers.

The Redhawks will look to clean up their game over the break, as they don’t play game action again until Jan. 3, when the team travels to face Southern Illinois University-Edwardsville for the start of Ohio Valley Conference play.