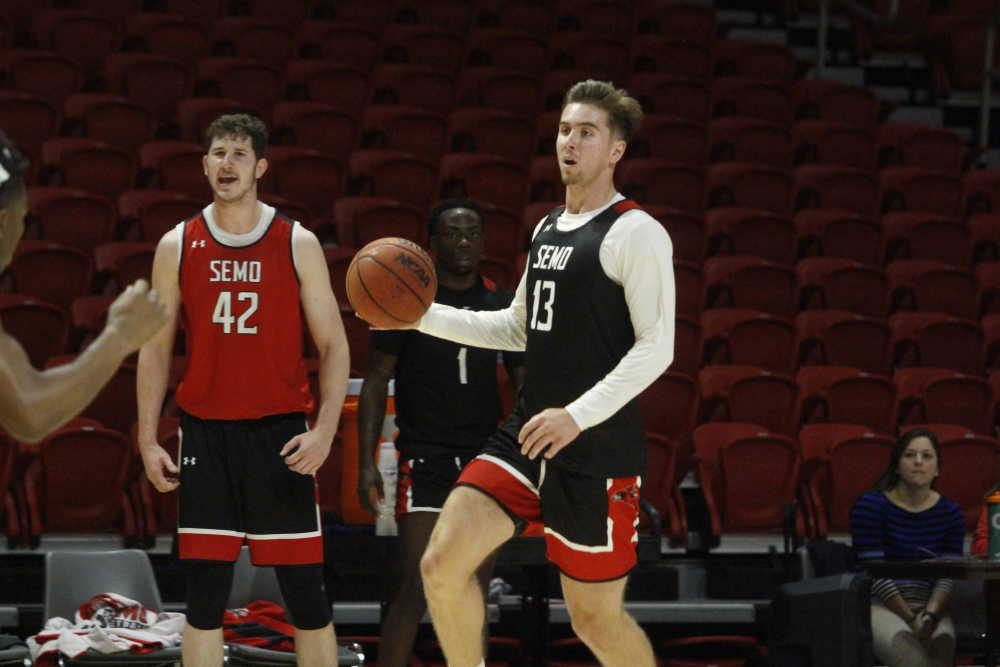 Sophomore forward Isiah Gable takes the ball up the floor during an October practice at the Show Me Center.
Photo by Joshua Dodge ~ Photo Editor

Playing without its leading scorer for the second consecutive game, the Southeast men’s basketball team overcame a 16-point halftime deficit to defeat the University of Tennessee Martin 74-69 in overtime Saturday, Jan. 5.

Sophomore guard Ledarrius Brewer missed the game due to a hip injury. In his absence, players tried to step into new roles, with varying results.

Sophomore forward Isaiah Gable made 11-of-17 shots from the field, including 4-of-9 from behind the arc. He also grabbed seven rebounds. Gable said it was important for guys like him and freshman guard Alex Caldwell to step up on both ends of the ball in the midst of Brewer’s absence.

Southeast coach Rick Ray said Brewer’s absence was beneficial for the Redhawks in two ways. He said the team gained confidence knowing they could grab a win without their top scorer, and Brewer got to see other players are capable of moving the ball and making big plays to help out the team, regardless if he was in the lineup.

Gable scored a career-high 28 points in the effort, including a 3-pointer toward the end of overtime to help solidify the Ohio Valley Conference victory in their conference home opener.

“When I hit that 3, I didn’t think it was over yet cause I think they came down and hit a layup or something,” he said. “But yeah, I think that was a big shot for us.”

While Brewer was on the bench, Caldwell made his first home appearance since Dec. 8 against Southern Illinois University due to a concussion. He had a season-high 17 points on 5-of-8 from the field, including 3-of-4 from 3-point range. He also had five rebounds.

One of those 3-point shots gave the Redhawks their first lead of the second half, 55-54, with less than two minutes left in regulation play. UTM redshirt senior forward Fatodd Lewis tied the game at 55 with a free throw with 1:29 left. Senior guard Jonathan Dalton then got fouled on a layup that went in and made the free throw to put SEMO ahead by three. But with 30 seconds left, UTM senior guard Delfincko Bogan swished a 3-pointer to tie the game at 58, resulting in overtime.

Hogan had the first basket, a 3-pointer, to start off overtime, and the Redhawks held the lead for the rest of the game.

The Redhawks came out firing to start the game, taking a quick 13-4 lead over the Skyhawks. Redshirt junior guard Skylar Hogan had six points on the board within the first three minutes, both baskets being 3-pointers. He came into the game third in the Ohio Valley Conference in three point field goal percentage at 47.1 percent.

Early on, the Skyhawks had a lot of easy opportunities to score from the inside, but it didn’t amount to anything on the board. In fact, UTM went scoreless for the first three minutes of regulation.

The Redhawks quickly fell behind once they went on a 10 minute scoring drought when junior guard Preston Parks hit a 3-pointer. UTM capitalized on SEMO’s slump by taking the lead 21-13 before another SEMO basket.

“We were not sharing the basketball,” Ray said. “You have to break down UT Martin’s defense, whether they are in zone or man. But I thought that we were taking the first opportunity to score and if we were to pass the ball we would get a great look.”

Going into the locker room at halftime, Southeast facing its biggest deficit of the game, Ray had one piece of wisdom to offer the team at the break.

Ray said Brewer’s status is unknown and he would learn the results of the MRI soon.