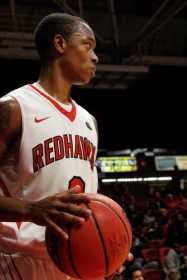 Southeast’s men's basketball found itself down double-digits for the third straight game in a 78-60 loss Thursday, Jan, 10 at the Show Me Center. Southeast coach Rick Ray said the biggest problem of the game was the stagnant offense.

Austin Peay (11-5 overall, 3-0 Ohio Valley Conference), which led from start to finish, held a 20-point lead with 15:11 left in regulation, the largest of the game.

“If we are struggling on the offensive end then our defense has got to be on point, and that was not the case today,” he said.

Both Southeast and Austin Peay are two of the best 3-point defending teams in the OVC, with the Redhawks at 29 percent and the Governors at 29.6 percent going into the game. However, Austin Peay shot 38.1 percent from the outside while Southeast shot 14.3 percent.

Southeast’s 60 points was its second-lowest total this season and the lowest of its three OVC games.

Ray said forwards need to take more opportunities to drive to the paint for shots and not always look to pass to a guard.

Reliance then fell on the defense, which, Ray said, struggled because of a lack of confidence.

“We get so wrapped up in the lack of success that we’re having on the offensive end that we let it affect our effort and being locked in on the defensive end,” Ray said.

Sophomore Ledarrius Brewer made his first OVC appearance off the bench since he suffered a hip injury Dec. 21. He played 22 minutes and put up six points in the loss. Ray said he wasn’t on a minutes restriction. Redshirt-junior guard Skylar Hogan led the team with 16 points, with 12 coming in the second half. Freshman guard Alex Caldwell made his first start for Southeast and contributed six points.