Men’s basketball unable to sustain strong first half, fall to Morant and the Racers 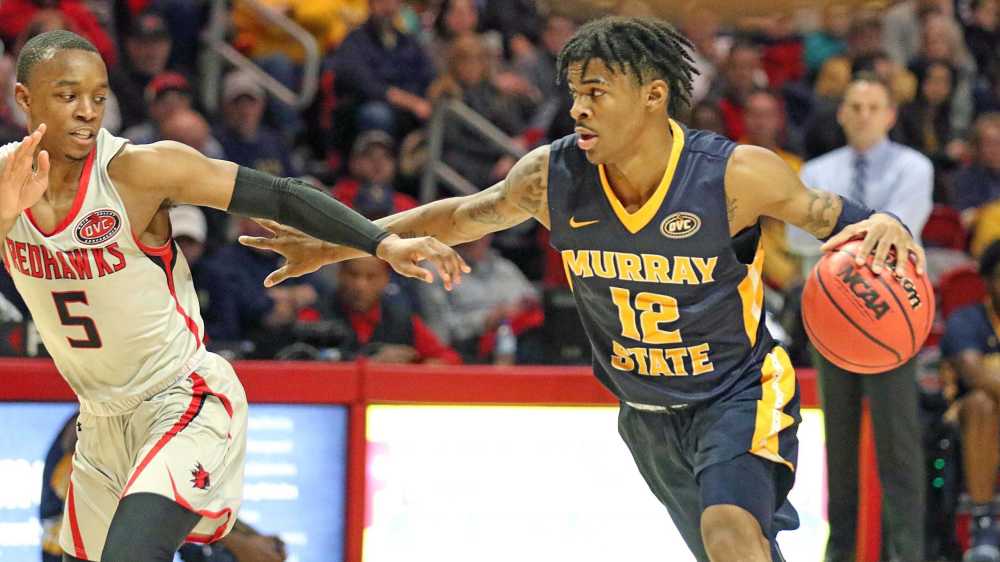 Like many in the crowd at the Show Me Center on Saturday, the Southeast men’s basketball team was keeping a close eye on Murray State guard Ja Morant.

The Redhawks hung close for the first 11 minutes of the game before the Racers pulled away for an 85-67 victory.

The 6-foot-3 sophomore and top 10 NBA prospect Morant led all players with 17 points and dazzled the crowd with his ball handling, play making ability and swagger.

“I think we did a good job of doing the things we asked them to do,” Ray said. “We had a group out there that was Ja-conscious and kept guys off the glass and kept him out of the paint, but on the offensive end they shared the basketball.”

Southeast (5-11 overall, 1-3 Ohio Valley Conference) went toe-to-toe with the Racers for much of the first half, shooting 48.3 percent and trading baskets down the stretch.

The Redhawks were down 29-17 with 10:27 remaining in the half when they went on an 11-0 run over a minute and a half span. Freshman guard Alex Caldwell and sophomore forward Isaiah Gable fueled the run by each nailing a 3-pointer, with Caldwell’s dagger narrowing the deficit to 29-28 with just under nine minutes left in the half.

“I thought we were really locked into the game plan [in the first half],” Southeast coach Rick Ray said. “When we executed the game plan, we gave ourselves a chance to be competitive against a good team. I think we strayed away from those things in the second half.”

The Redhawks stayed competitive through the first half because of their shared ball movement and their ability to throw the ball ahead in transition, much like Murray State.

The talk of the night was Morant, and the South Carolina product did not disappoint. He led the Racers into halftime with 12 points and seven assists, connecting with freshman forward KJ Williams on a pair of electrifying alley oop dunks.

In the second half, the Racers kicked up the intensity and pulled away. They began isolating Redhawk players and forcing them to make individual plays, straying away from the team-first approach that found success in the first half.

“When we play together as a team, we got a chance to be pretty good,” Ray said. “But when we go off on islands and start trying to make individual plays, then we’re not very good.”

Another key to the Racers’ success was their 41-25 edge in rebounding, including 14 on the offensive side. Williams had a game-high 10 rebounds and narrowly missed a double-double, finishing with nine points.

“Just us trying to go boxing [out], go hit and then go chase the ball,” junior forward Darnell Cowart said. “You have got to go box and then go get it, so I think that helped us a lot this game.”

In the second half, senior point guard Jonathon Dalton hit the ground hard and suffered a wrist injury, and that impacted how the Redhawks attacked the remainder of the game.

“I feel like his absence had a really big impact on the team, because he has the ball most of the time,” sophomore guard Ledarrius Brewer said. “He gets everybody open when he drives and he just controls the team pretty much.”

Dalton will get his wrist evaluated later this week to determine the severity.

“He’s the engine to what we’re trying to do,” Ray said. “He’s the guy that can break down the defense and he makes sound decisions all the time. So not having him out there is huge, and he’s the guy that plays the most minutes for us.” 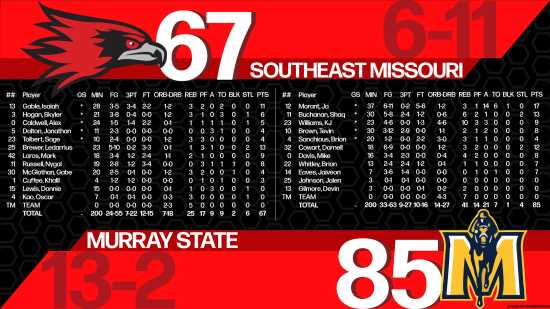 In Dalton’s absence Murray State was able to piece together a strong second half, outscoring Southeast 39-29, with Morant leading the way for the Racers.

With his 14 assists, Morant got his whole squad involved as only two Murray players failed to score.

“I feel like the players on their team know their role, that’s what makes them hard to guard,” Brewer said. “Ja Morant is just going to get everybody the ball when they should have it.”

Brewer, coming off the bench for the second straight game to rehab his hip injury, led all Redhawks in scoring, with 13 points on 50 percent shooting from the field. The only other SEMO player to score double digits was Gable, who netted 11 points.

Darnell joined Morant with 12 points on an efficient 6-of-9 shooting and senior guard Shaq Buchanan aided with 13 points in the win.