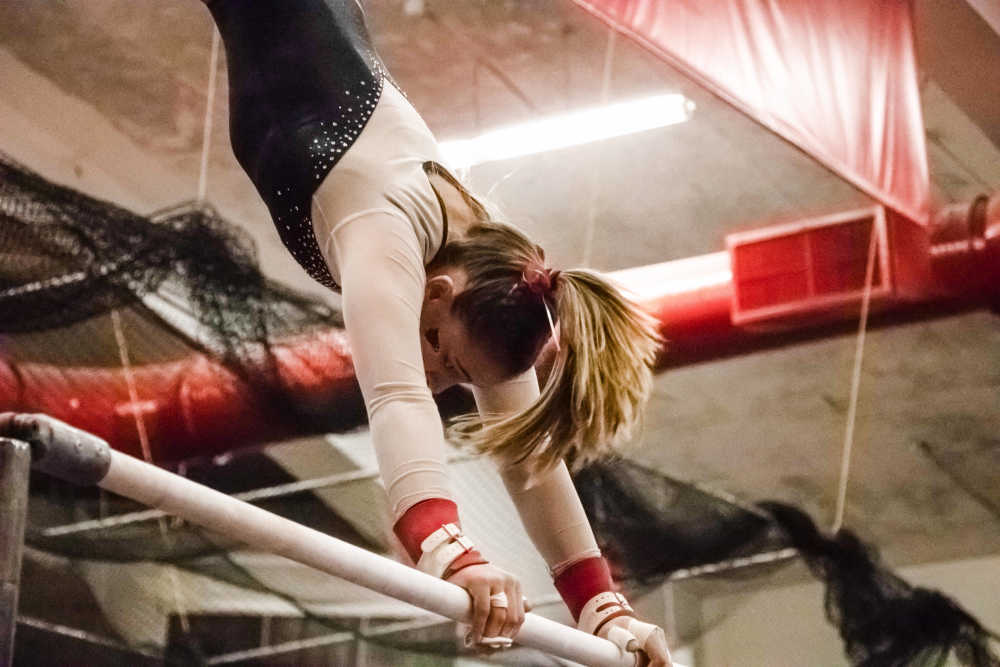 Junior Mackenzie Slee performs her routine on the uneven bars at Houck Field House on Jan. 18, where she finished with a score of 8.725, placing 11th in the event and fifth among Redhawks.
Photo by Kate Marshall ~ Photo Editor

Southeast gymnastics kept it close, but lost their first home meet of the season at Houck Field House 193.225-189.800 to the San Jose State University Spartans on Friday, Jan. 18.

This was a major improvement for the Redhawks from their previous meet, as they were only able to manage 180.925 points at Iowa. The 189.800 was a season high for Southeast.

“It was great coming out from the locker room and seeing the crowd filing in,” Redhawks coach Ashley Lawson said. “It’s been a long time since there’s been that many people here to watch a gymnastics meet.” 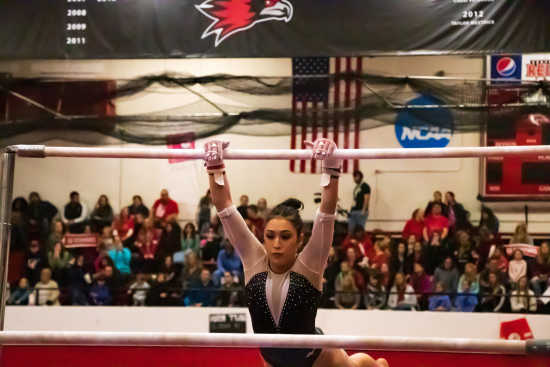 Freshman Maya Tran works her uneven bars routine on Jan. 18 at Houck Field House. Tran finished with an 8.400 in the event, placing last among all competitors. l
Photo by Kate Marshall ~ Photo Editor

“Being at home, having all the support from students and faculty really helped me calm my nerves and have fun doing it,” Kaziska said. “I definitely had more fun this meet.”

Kaziska had quite the coming out party competing in front of her home fans for the first time. She competed in all four events vault, uneven bars, balance beam, and floor. She scored a 9.5 on the bars, a 9.625 on the vault, a 9.825 on the beam which was good enough for first place in that event, and a 9.900 on the floor exercise where she tied for first with Spartans sophomore Taylor Chan.

“She’s going to do great things here,” Lawson said. “This is only the beginning, and so to see her blossom right now and see what she is going to turn into in four years, she’s going to help put SEMO back on the map.”

Sophomore Gabrielle Adams competed in three events and also had a strong performance for the Redhawks. She won the vault with a score of 9.775 and put up scores of 9.400 on the beam and 9.725 on the floor exercise.

“Bars is our thinnest event,” Lawson said. “We had to pull a couple girls out of retirement, so they thought they would never see bars again and here they are trying to compete in it. So it’s definitely one of our weaker events, but it’s something we’re looking to improve on. As practices continue and meets keep rolling in, we’re hoping that those girls can step up and find their place in that lineup.”

With the loss, Southeast dropped to 0-5 on the season, which leaves Lawson still looking for her first win as head coach at Southeast. She is still optimistic about this team and program moving forward, however. The Redhawks are a young team. They have just one senior on their 13-person roster, which includes three freshman, five sophomores, and four juniors.

“We knew it was going to be a rebuilding year,” Lawson said. “When I inherited the team, we were mentally and physically broken, so our big thing for this year was team culture and rebuilding that. I think for the most part the girls have really bought into that.”

Lawson had a simple but effective method of getting the culture back to a good place.

“A lot of it had to do with just having more fun in here,” she said. “Letting the girls know it is OK to be themselves; they couldn’t be themselves because they thought they were being judged, and I tell them this is a judge free zone. I’m making an idiot of myself just about every day, and they know that it’s okay to be them. You can’t be somebody that you’re not and try to be successful.”

Kaziska agreed that fun has been infused back into the program.

Lawson said it is only a matter of time before the results come.

“Our scores aren’t necessarily showing that we’re doing great things, but if you look at the overall picture, the team has come together and the atmosphere is definitely better,” Lawson said. “It’s just going to take a little bit of time for everything to mesh with gymnastics and personalities.”

For Lawson, this job is a homecoming, as she is back coaching where she competed as a collegiate gymnast. She competed under her maiden name of Ashley Godwin and owns many school records at Southeast.

“I’m excited to be back,” Lawson said. “We’ve worked hard on being out in the community last semester to be able to get more community involvement. I think that the atmosphere that we’re going to bring in is going to be fun, and it’s going to be fun looking up and seeing people sitting there and be on the other side of things instead of being the athlete, just being the coach and smiling and taking it all in.”

Southeast will be back in action Jan. 25, 2019 at Illinois State before returning home to take on Northern Illinois at Houck Field House on Feb. 8, 2019.