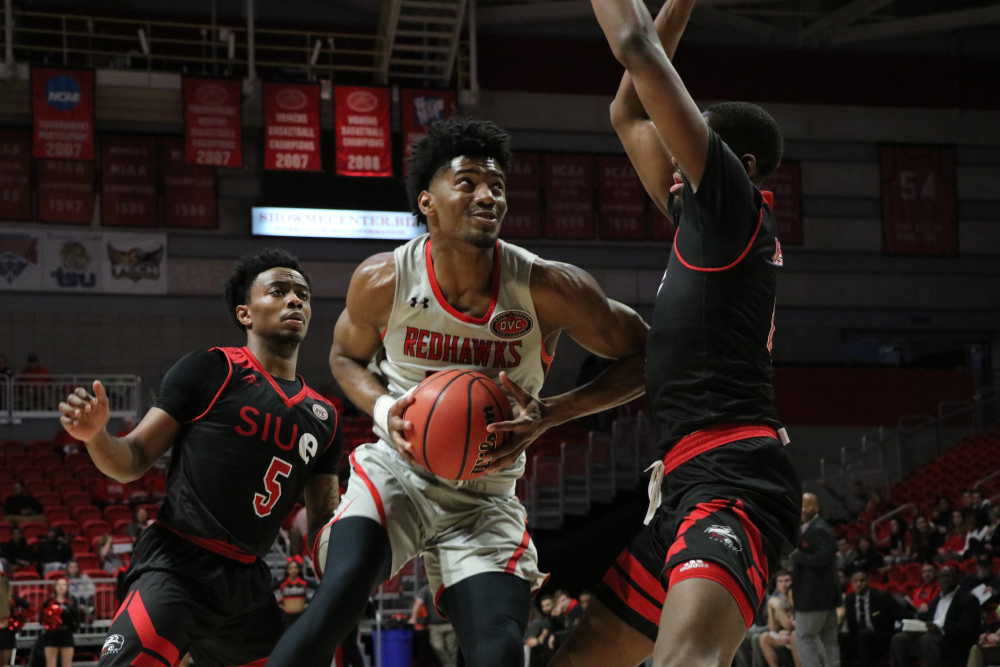 Two halves were not enough to separate Southeast and the Southern Illinois-Edwardsville Cougars when they met up at the Show Me Center on Thursday. Two overtime periods were not enough either. In a thriller that will be remembered for some time, SIUE ultimately prevailed 87-86 in triple overtime.

Two no-calls for Southeast in the final 10 seconds of the third overtime sent Redhawks coach Rick Ray over the edge after the game. Ray had to be restrained by his assistant coaches to not follow the referees down the tunnel.

The first occurred after a Cougars miss with 11 seconds left. Southeast secured the rebound, and with the Redhawks trailing by one, sophomore guard Ledarrius Brewer drove the lane and the referees signaled for a jump ball, to Ray’s dismay.

The possession arrow favored Southeast so they had one more crack with four seconds left. The inbounds play resulted in a good look at a 3-pointer from the top of the key by sophomore forward Isaiah Gable, but he was blocked by Cougars freshman guard Cameron Williams and the buzzer sounded, giving SIUE the victory.

“I’d have to go back and look at it,” Ray said speaking on the final play. “I was emotional at that point in time, so to say whether it was block or a foul, I don’t know.”

Ray was not just upset about the final play when he tried following the officials after the game.

“It was a summation of things,” Ray said. “I just thought there were some calls down the stretch that didn’t go our way. I thought we were doing a great job of getting into the paint and there was a lot of contact for there not to be a foul.”

As one might expect of a triple-overtime game, this was a back-and-forth affair. It was tied nine times and the lead changed hands 11 times.

Brewer led the Redhawks with a season-high 24 points in a game-high 50 minutes. Southeast freshman forward Gabe McGlothan notched his first career double-double, finishing with a career-high 18 points and 16 rebounds.

Neither team shot the ball particularly well. Southeast fared the better of the two going 30 of 67 from the field. SIUE made only 28 of its 85 attempts. All those misses led to the teams combining for a whopping 109 rebounds, 58 for the Cougars and 51 for the Redhawks. Twenty-one of those 58 rebounds were on the offensive glass for SIUE. The Cougars outscored Southeast by a 20-7 margin in second chance points.

Southeast struggled from the charity stripe, managing to convert on 21 of 35 attempts.

One bright spot for the Redhawks was their bench outscoring the Cougars by a 29-11 margin.

Redhawks freshman forward Sage Tolbert contributed 18 of those bench points, including 13 in the first half, going 6 of 7 from the field. His biggest contribution were his 17th and 18th points as he hit a buzzer-beating layin off of a tipped full-court inbounds pass at the end of the first overtime to tie the game at 76 and send it into a second overtime.

Southeast was up 36-34 at the half and extended its lead to as much as 11, but the Cougars clawed their way back in. Despite not leading the whole second half, SIUE tied the game at 68 with one minute remaining, and neither team scored during the remainder of regulation.

In the first overtime, Southeast fell behind immediately as Cougars junior guard Brandon Jackson got a layup on the first possession. The Redhawks would tie it back up at 74 on a layup by Brewer with 25 seconds remaining, only for SIUE to answer back with a floater by junior guard Christian Ellis to take the lead 76-74 with just under 3 seconds remaining. Tolbert then hit his layin to send it to the second OT.

The third overtime featured the Cougars having a four-point lead two different times. Southeast answered with a banked in three by Russell and an and-1 by Brewer to bring the game within one each time. However, one point was as close as Southeast would get.

The Redhawks dropped to 6-14 overall and 1-6 in Ohio Valley Conference play with the loss.

Four of the five starters for the Redhawks played at least 40 minutes, with three of the five playing more than 45.

“The number one thing is we got to be able to get our chin up off the floor,” Ray said. “We’re all physically and emotionally spent.”

Southeast will have to recover quickly as they are back in action on Saturday, Jan. 26 to take on the Eastern Illinois Panthers at the Show Me Center.