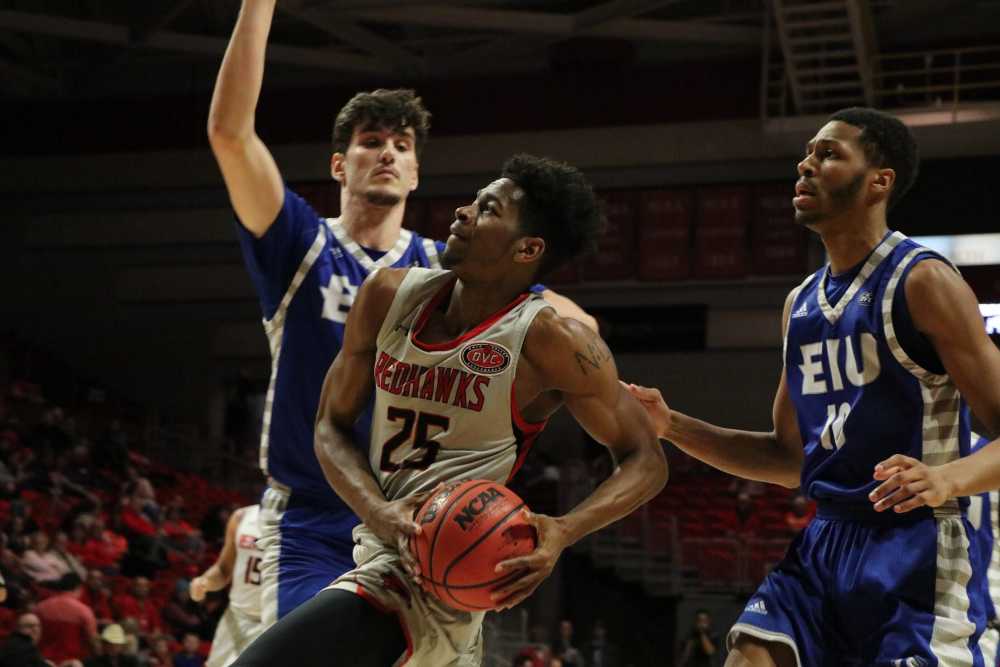 Sophomore guard Ledarrius Brewer drives past Panther defenders to rise up to the rim Jan. 26 at the Show Me Center.
Photo by Kate Marshall ~ Photo Editor

Southeast ended a five-game losing streak with a 64-59 victory over Eastern Illinois Saturday, Jan. 26, at the Show Me Center.

The Ohio Valley Conference opponents went back and forth all game, with seven lead changes until the final minute.

With the score tied at 59 and the ball under the EIU basket, the Redhawks ran an inbound play to sophomore guard Ledarrius Brewer, who took the pass and threw down a two-handed dunk with 34 seconds left.

On their ensuing possession the Panthers were charged with a moving screen to give the ball back to SEMO. Sophomore forward Isaiah Gable was then fouled and sank one of two free throws to give Southeast a 62-59 lead with 28 seconds left.

As the Panthers brought the ball near half court on the ensuing play, Southeast forward Gabe McGlothan pounced on the opposing guard, forcing a spin move that led to a steal by senior guard Jonathan Dalton. From there, Southeast sank two more free throws to seal the game and win 64-59.

The win followed a tough triple-overtime loss on Jan. 26, and it broke the Redhawks five game losing streak.

“I don’t think there’s a feeling better than this,” Brewer said after being asked about ending the teams recent skid. He led the Redhawks with 24 points and five assists.

Eastern Illinois opened up the game on a 19-5 run and from that point on the Redhawks outscored Eastern Illinois 26-12 and got within two heading into the half. SEMO notched four steals in the half, with senior Jonathan Dalton swiping two for himself. The Redhawks held a big advantage at the free-throw line, shooting 10 of 14 in the first half and only sending EIU to the line two times.

Gable kicked off the second half for the Redhawks by tying the game for the first time on a quick lay-in. He went 3-3 from the field in the second half and 3 of 4 from the line, putting up 11 points in the half. Southeast took its first lead on a deep three pointer from Brewer with 12:58 left in the game.

Southeast coach Rick Ray said he was pleased with the team’s effort after going down early.

“Our defense and our activity on the ball turned into instant offense on the other end,” Ray said.

He was also quick to point out some of the Redhawks strong suits in this game.

“There are couple things I want to point out statistically that I think ended up making huge dividends in this game,” Ray said. “Josiah Wallace is an unbelievable player, and we held him to six points in the second half. We only had four turnovers in the second half and we ended the game with seven straight stops.”

Wallace finished with 21 points to lead EIU in scoring. Brewers 24 was enough to make him SEMO’s top scorer.

Southeast continues its season on Jan. 31 when the men travel to Belmont University to take on the Bruins.