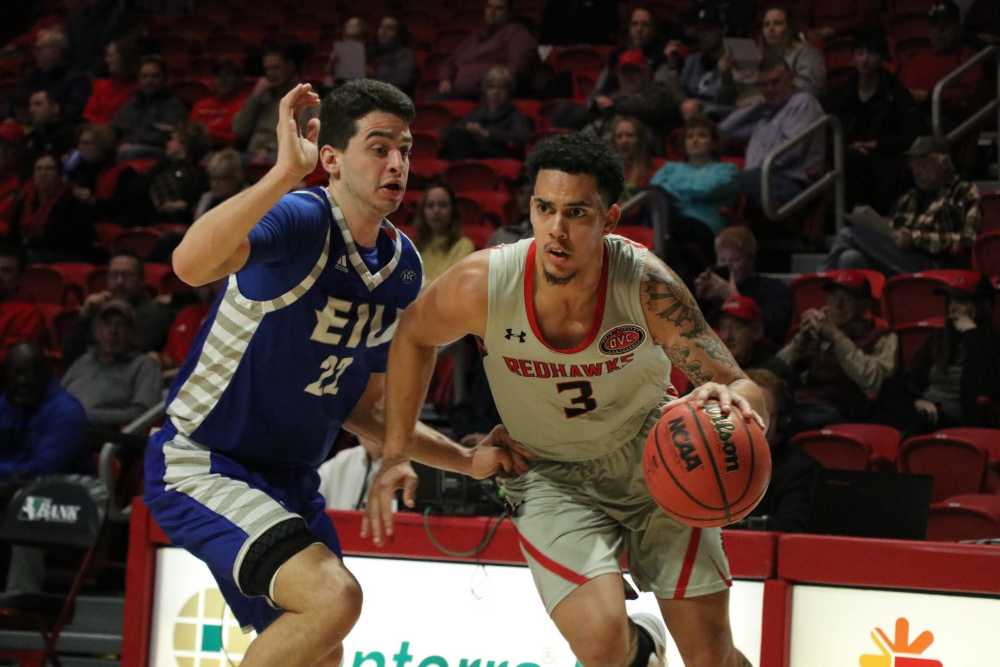 Redshirt-junior guard Skyler Hogan cuts past an EIU defender and drives to the basket on Jan. 26 at the Show Me Center.
Photo by Kate Marshall ~ Photo Editor

Problems continued for the Southeast men’s basketball team last week, with a pair of Ohio Valley Conference road losses in Nashville, Tennessee, by a total of 55 points.The Redhawks lost 97-71 to Belmont on Thursday, Jan. 31, and 79-50 to Tennessee State two days later. The Redhawks have lost seven of their last eight games, falling to 7-16 overall and 2-8 in the OVC.

The Redhawks dropped to the Bruins for the seventh year in a row. SEMO’s sophomore guard Ledarrius Brewer was a bright spot for the team when he finished his third straight game of over 20 points with a 22-point game and he hit a season-high six 3-pointers against the Bruins.

Freshman guard Alex Caldwell added 16 points off the bench for the Redhawks who trailed at halftime 47-29 after an 11-3 run from Belmont.

The Redhawks had a much more competitive second half but could not seem to bounce back from the deep deficit of the first half. The Bruins are sitting comfortably at what they are ranked in the Ohio Valley Conference with a 17-4 overall record and an 8-2 record in the OVC this season.

Tennessee State used and even bigger first-half run in its victory on Saturday when the Redhawks struggled to score. The Tigers had a 22-4 run during the first half, SEMO was down 20-42 at half time. Southeast only shot 25 percent in the first half, they committed nine turnovers and was never able to capture a lead throughout the game.

Coming back from the break, SEMO made a 9-2 run against the Tigers led by Caldwell collecting five of those points. Southeast was never able to get smaller than an 18-point deficit during the game, and the Redhawks came up empty with a 79-50 loss.

The Redhawks fell flat offensively, Caldwell, Brewer, sophomore forward Isaiah Gable, and freshman forward Gabe McGlothan were all held to seven points. McGlothan did grab eight rebounds for Southeast. Tennessee State is ranked eighth in the OVC with a 4-6 conference record and a 7-15 record overall.

Southeast (7-16 overall, 2-8 OVC) has now lost seven straight away games with their most recent loss against Tennessee State. The Redhawks will look to turn things around as they return home to face Tennessee Tech and Jacksonville State on Feb. 7 and Feb. 9.