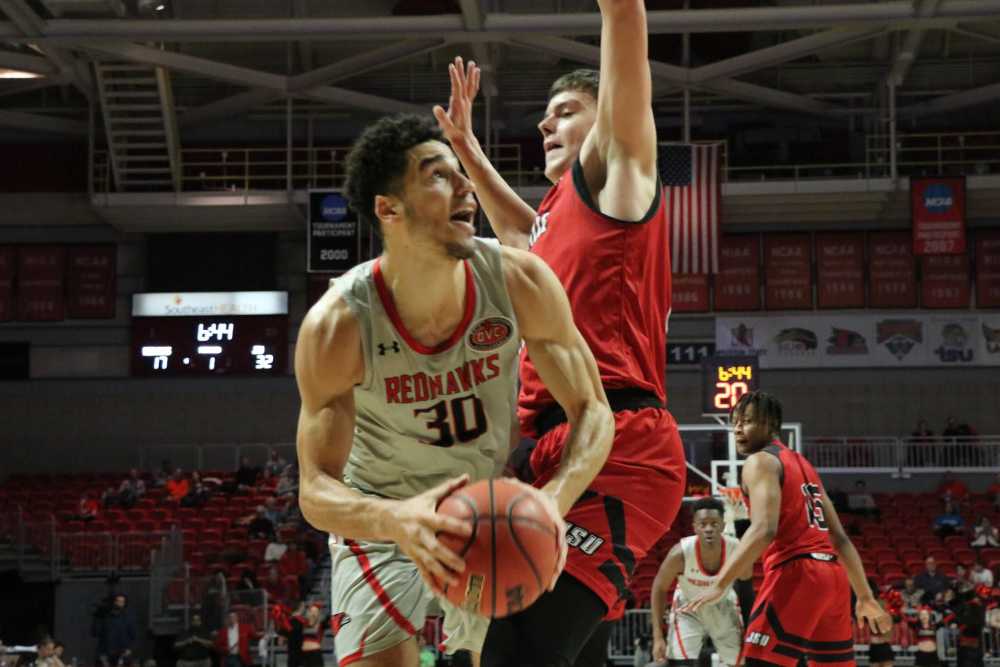 Freshman forward Gabe McGlothan gets past a Gamecocks defender at the Show Me Center and looks to score on Feb. 9.
Photo by Kate Marshall ~ Photo Editor

The Redhawks got off to a slow start against the Gamecocks, falling behind 16-7 within the first six minutes.

Southeast pulled within three points in the first half, but Jacksonville State answered back with a 14-2 run, sending the Redhawks into halftime with a 42-28 deficit.

After the break, the Redhawks started the second half on a 6-0 run over the opening 1:34 of the second half, trimming the deficit to single digits and forcing Jacksonville State to take a timeout to regroup.

Freshman guard Nygal Russell excited the crowd with a 3-pointer at the 14:35 mark, pushing the Redhawks to get as close as eight points.

Jacksonville State (17-8 overall, 9-3 OVC) eventually pulled away for the victory by 17 points.

“I think there’s a lot of potential in the way that we play,” McGlothan said. “We are a young team, and I think as we learn to grow and we keep having that competitiveness and our ability to be able to come and fight back it will pay off.”

“It’s a learning experience for our guys, but we have got to be consistent on a mental and physical toughness level if you want to be successful,” Southeast coach Rick Ray said.

“This game is a loss, but I think that when you lose you can learn a lot from it; when you fail you can learn,” McGlothan said. “That’s the great thing, even though it comes in the harshest of ways.”

Southeast (8-17 overall, 3-9 OVC) will go back on the road next week to face, the University of Tennessee-Martin Feb. 14 in Martin, Tennessee, and Eastern Illinois on Feb. 16 in Charleston, Illinois.