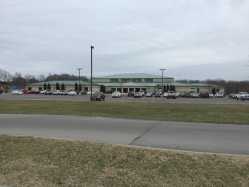 Osage Centre where the Cape Comic Con will be held.
Photo by Andrew Myles ~ Arrow Reporter

The 14th annual Cape Comic Con will be held April 26-28 at the Osage Centre, in Cape Girardeau where there be comic book artists, publishers and merchandise, comic con’s director Ken Murphy said.

Comic-con director Murphy said the doors will open at 3 p.m. where the first events will begin to take place shortly after.

Murphy said there will be a Lego building event at 6 p.m., a trivia event at 7 p.m. and the first after comic con festivity called Halfway to Halloween.

He said Halfway to Halloween is a horror fan event where there will be discussions about the original production of the movie “House on Haunted Hill” and a showing of the movie, as well.

Murphy said they are always looking to improve on content to better the comic con, so they have two new additions to events that will take place on Saturday.

“On Saturday evening we now have professional wrestling and the costume contest that has continued to grow,” Murphy said.

He also said the event has not changed drastically, but they are adding new programs and increasing content.

The event pulls in attendees from a wide area, he said.

“We will get people coming to the event from Michigan, Kansas and Atlanta, it’s just called the

He said last year 5,000 people attended the event last year and hope that number increases by 500 this year.