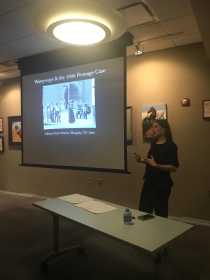 The agricultural impact African-Americans had on the Missouri Bootheel drainage system was the focus of a lecture led by Heidi Dodson on April 4 at Cape Girardeau Public Library.

Early in the 20th century people noticed the rich farming potential the Bootheel region had, which at the time had only swamps and forest, Dodson said.

In the 1920s, Franklin D. Roosevelt created the Civilian Conservation Corps and hired thousands of men, both black and white, although, in segregated camps, Dodson said. In the Bootheel region, there were three camps that worked specifically for draining the area.

“One camp for white workers in Hayti, one in New Madrid and for African Americans was at Delta here in Cape county,” Dodson said.

Dodson also focused on how black families built a community within the area. She said hunting and fishing were very big in those areas and people would get baptized in the ditches. “Think of the ditches as places, as social spaces. Kind of a community commons,” Dodson said.

She said some residents of the Bootheel region tend to overlook the significance of the many drains and ditches they encounter.

“You don’t realize that they are what makes the Bootheel possible in terms of what it is today,” Dodson said.

Dodson’s full research article will be available in the October’s 2019 issue of the Missouri Historical Review.