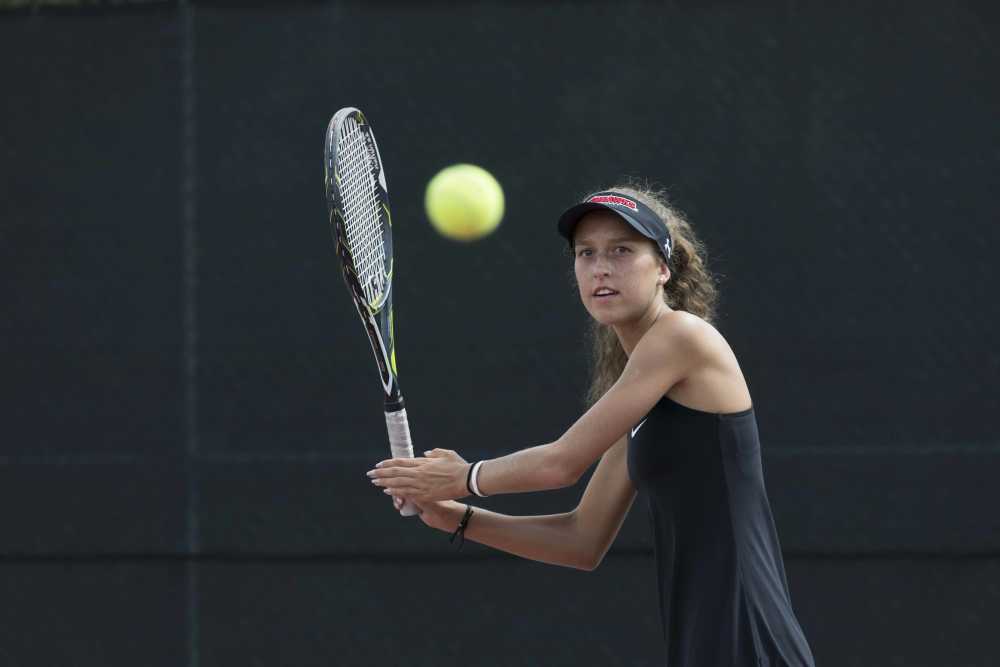 Freshman Romana Tarajova prepares to strike the ball during a practice in Cape Girardeau.
Photo by Josh Russell

Zonova and Sinha both competed in the women’s No. 2 doubles, winning the match 6-3.

Tarajova and Barriga also won the No. 3 doubles match with a score of 6-4. Senior Isabella Krupa and freshman Teona Velkoska competed in the No. 1 doubles, tying the first match 6-6.

Match two on Saturday against Eastern Illinois gave Southeast its fourth conference win as they recognized Anais Emelie, who hails from Palaiseau, France, and Isabella Krupa, from Kissimmee, Florida, on Senior Day.

In the No. 3 doubles, Barriga and Tarajova recorded a 6-3 win.

The No. 5 seeded Redhawks will take on No. 4 Belmont in the 2019 OVC Women’s Tennis Championship at the Centennial Sportsplex in Nashville, Tennessee, on Friday, April 26.

Despite the loss of two seniors, the tennis team will return a a team of sophomores, juniors and seniors next year; Barriga, Sinha, Tarajova, Velkoska, Grace Powderly, junior Zonova and sophomore Maja Lundell.