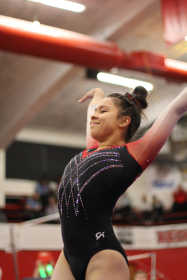 Now more than ever, freshman gymnast Anna Kaziska is in love with her sport. Her second-place finishes in both the beam and floor events at the 2019 USA Gymnastics Women's Collegiate National Championships Individual Event Finals were the result of a life’s worth of training and hard work, as well as the beginning of a promising college career.

The Louisville, Kentucky, native credits her successes throughout this past season to the passion of her coaches, the support of her teammates and her desire to constantly improve the small details of the four routines in which she competes.

Kaziska was named Midwest Independent Conference Newcomer of the Week six times throughout the regular season and was awarded Newcomer of the Year. According to her though, everything before the national meet was like practice for her final outing of the season.

“I knew it was the last competition, and I wanted really badly for it to be my best meet and to give it all I had, and I knew there was nothing to lose,” Kaziska said.

She said her coaches’ constant reminders to just go out, be herself and have fun are what enables her to bring so many moving parts of a routine together.

She said her journey with gymnastics began at the age of 2 with “Mommy and me” classes, and she soon developed a passion for the sport that has never relented. When she isn’t in the gym training, she is thinking about how she can improve some small skill or part of a routine.

Southeast coach Ashley Lawson said there are times in practice when Kaziska has to be forced to move onto the next event rotation.

“She’s hard on herself in the gym, and if she’s off on something, instead of saying, ‘I’ll fix it tomorrow,’ she gets back on the beam or the bars and says, ‘I’m not leaving until I get this the right way,’” Lawson said.

Lawson said this quiet focus and her tendency to “keep her head down and work hard” makes her a leader on the team and one of the most humble athletes she’s ever coached, despite her first-year success.

“She’s going to do big things, and I think she’s going to help rewrite the record books here,” Lawson said. “She’s hungry and thirsty and more, so if we just get her to calm down a little bit and trust her gymnastics, she’ll definitely excel for the next three years.”

Lawson said the team’s improvement this year, even when plagued with injuries, gives her high expectations for next season. Along with Kaziska, three other Redhawks qualified for nationals. Mackenzie Slee (vault, floor), Alana Fischer (bars) and Gabrielle Adams (vault) all return next season.

For Kaziska, the road to improvement starts first with resting the body, then returning to the gym to pick up where she left off, improving in all four events, qualifying for nationals again with the hopes of being a USAG champion.