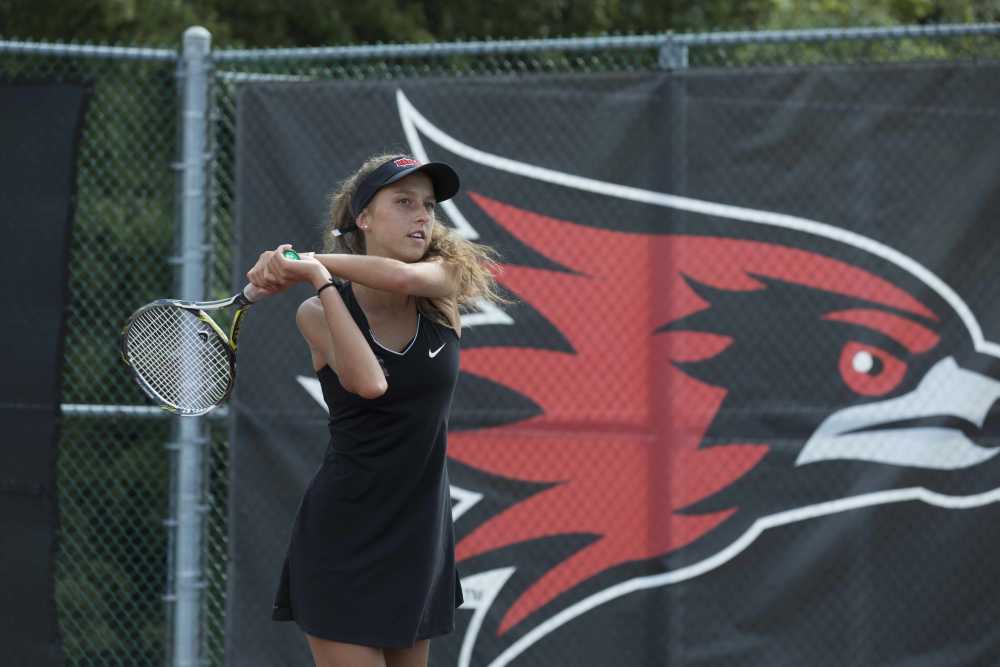 Freshman Romana Tarajova works on her foreswing during a practice in Cape Girardeau.
Photo by Josh Russell

The Southeast tennis team concluded its 2019 season at the Ohio Valley Conference Championship in Nashville, Tennessee. The team captured their first win during the championship in 16 years against Belmont before coming up short to Austin Peay in the semifinals.

“It was a great win and it shows that our program is on the rise,” Southeast coach Mary Beth Gunn said. “When I first got here, we were dead last in the conference, so in that short turn around, it’s great that we’re already seeing some accomplishments because that really makes you feel motivated to keep getting better each year. I think it will help with recruitment of future student athletes as well.”

Another accolade the Redhawks brought home from the season was OVC Freshman of the Year.

“I’m really happy that I had the opportunity to be No. 1 my freshman year,” Tarajova said. “I don’t think that I felt pressure, I just always try to play my best and do my best. I think that every single person on our team is part of the team no matter if you’re No. 1 or No. 6.”

“I think it was a really good match for me,” Zonova said. “I think that day, I played really good because I was so determined that we needed to win.”

After losing the first set 0-6 at the No. 5 singles, freshman Sneha Sinha was able to bounce back and secure the second and third sets 6-1 and 6-4. Sinha said her break between sets helped fuel her success for sets two and three.

“I knew that I could play better than I did, and I was lucky enough to get that break between that second set and that third set,” Sinha said. “I was up and down, and when I managed to get that match point, I was so relieved.”

The 4-1 win over Belmont earned the Redhawks a spot in the semifinals, where they faced top-seeded Austin Peay.

Sinha and Zonova secured the only doubles win, earning a 6-4 win at the No. 2 position.

The two were a strong force throughout the season.

“Of course, you have to understand your partner, but I think overall it was just like our games kind of fit together whenever we play doubles,” Zonova said. “Sinha has really good serves and returns, and I’m good at the net, so it kind of mixes and matches nicely.”

Sneha added that toward the end of the season she was able to anticipate what Zonova was going to do on the court.

The Redhawks concluded their season with a 12-10 overall record.

“I'm super proud that we came together as a team to pull this off,” Gunn said. “Because even though it looks like tennis is an individual sport, it takes a true team effort to win. Everybody really exhibited great focus during our matches in order to pull the season off.”