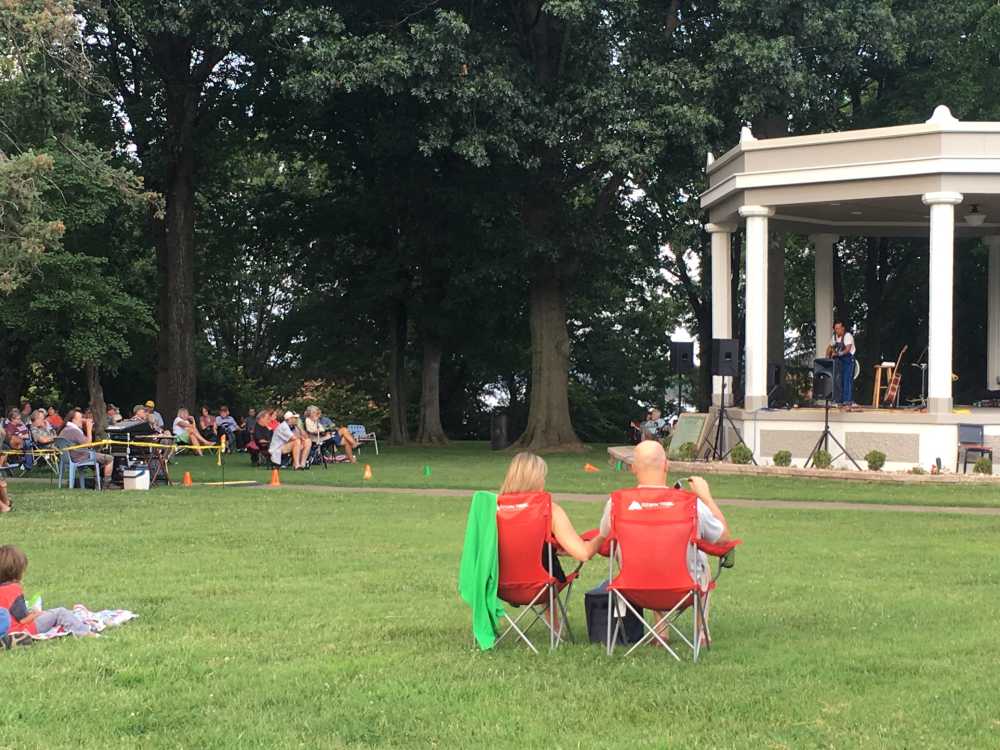 A crowd listens to Jimmy Davis perform at the first Tunes at Twilight of the fall season.
Photo by Nicolette Baker ~ Arrow Reporter

Taking the stage in dark denim overalls and bare feet, the personification of bluegrass and rock ‘n’ roll brings music and memories to the crowds gathered at the first Tunes at Twilight concert of the fall season.

Memphis-born singer and songwriter Jimmy Davis kicked off the Aug. 16 event with his original song, “You Should Be with Me,” which describes his experience in Wimberly, Texas. The opening lyrics paint a vivid picture of his view from his cabin, later mentioning a lost love interest that should join him.

Davis has performed at Tunes at Twilight for the past several years, so as he tells a story about his grandmother’s cookware, the crowd cheers in anticipation. His song “Cast Iron Love” features both a steady beat and honest storytelling style unique to Davis’ music. Many of Davis’ themes seem to resonate with the crowd, as he describes picturesque rural scenes, family and love in a down-to-earth way.

Between songs, Davis paused to share other personal stories with listeners. From meeting his wife to traveling to the Netherlands, Davis gains much of his lyrical inspiration from his own life experiences.

After a particularly upbeat song, Davis paused to point out the children that had been dancing in front of the stage. It led him to describe his early relationship with music as a budding singer. He was five years old when he first performed in front of an audience.

“I made two dollars square dancing at the Moose Lodge when I was five, dancing along to the Monkeys’ ‘I’m a Believer,’” Davis said. “And I thought, ‘Well, now I’ll have to learn how to play this.’” Davis received his first guitar when he was nine and began playing at Memphis venues. He noted while his skill level has changed, his songwriting style has stayed consistent.

Davis weaves storytelling into his music, touching upon themes of past heartbreak, country living and his faith. His songs combine traditional bluegrass with rock n’ roll and folk influences — Davis describes this crossing of genre lines as “The American Way.”

“It’s taking music and changing it, adding to it,” Davis said. “There’s always going to be traditionalists. I just can’t do that.”

After playing his final tune, “Environmental Love Song,” Davis thanked the crowd for attending. He stopped to speak with fans after the show and promote his recent albums.