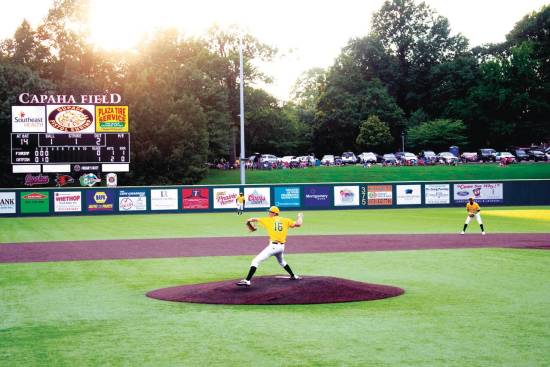 Southeast freshman Byan McNeely was named the 2019 Prospect League Starter of the Year with a 2.94 ERA and a 7-2 record.
Photo by Jelani Days ~ Staff Photographer

The nation's pastime took Cape Girardeau by storm this summer, where the Cape Catfish reached an unprecedented level of success.

Boasting a 43-17 record in their inaugural season in the Prospect Collegiate Baseball League, the Catfish tied the all-time league reached for wins (43) and won the Western Division Championship. The team ultimately fell short, losing the final game 5-2 to the Chillicothe Paints in the league championship series.

Prospect League Commissioner Dennis Bastien, with 30 years of working experience in the sport, had nothing but praise for the new team’s immediate success.

“What they accomplished in their first year of operation was renowned and never happened before our marketing there,” Bastien said. “They have been amazing and remarkable, and put together an extremely competitive, almost record-breaking team.”

The Prospect League is a summer collegiate league, featuring players from all across the nation. The league is comprised of six states across the Midwest. Prior to the birth of the Catfish, the Bootheel’s closest team was the Springfield Sliders from Illinois.

Bastien believes the team was well received in the community because of the small market.

“You know, every night there was always 400-500 people on the hill, and 300 more on the new party deck out in right field,” Bastien said. “We felt that this could happen, it was the right sized market.”

The Catfish were drawing fans consistently from all over the Bootheel, Bastien believes.

“You’ve got Cape, Jackson, Scott City … over 100,000 people in a 30-mile radius, and not a whole lot of summer entertainment,” Bastien said.

The Catfish play home games at Capaha Field, and the connection to Southeast baseball does not end there.

The team featured three Southeast players, including sophomore middle infielder Turner Fritts, as well as right-handed sophomore pitcher Bryan McNeely - who took home the Starter of the Year award given to the league's most outstanding pitcher - and sophomore catcher Andrew Keck, who was one of seven total Catfish named to the Western Division All-Postseason team.

McNeely, a 6-foot-5 product of Scott City High School of led the way on the mound for the Catfish this season. With a 7-2 record, McNeely fanned 42 batters and finished the season with a 2.94 EPA, showing potential heading into his sophomore season at Southeast.

Keck, a St. Louis native and former high school state champion, had six home runs and 35 RBIs with a .269 batting average in 44 games for the Catfish. At 6-foot-2, 215 lbs, the former Under-Armour All-American will add a powerful bat to the Redhawks’ lineup in 2020.

Despite the Redhawks connection, the success of the team in their inaugural season was much more dependent on recruiting from colleges all over the region.

Catfish outfielder from West Virginia University Andrew Stone won the Prospect League Most Valuable Player Award. Stone was found at the top of the leaderboard in multiple categories, including stolen bases (33) and runs scored (66). His quick feet combined with a strong bat, allowed the player to 16 home runs on a .397 average with the Catfish.

Off the field, Catfish Coach Steve Larkin was named Prospect League Manager of the Year. Larkin, who played in one MLB game in his playing career, comes from a successful baseball pedigree as he is brother to Hall of Fame Cincinnati Reds shortstop Barry Larkin.

“[The team] will make a call [to a school] and say, ‘Hey, do you have a pitcher you can send us for the summer?” Bastien said. “They were able to recruit from colleges all over the south and lower Midwest.”

This kind of recruiting process combined with the energy around the Cape community for a new baseball team allowed for the historic season that followed.

The Catfish will start their road to next season’s championship in May 2020, when the Prospect League hosts its opening day.