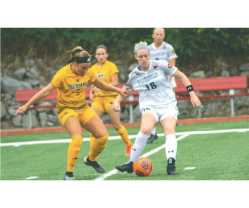 The Redhawks started off strong offensively in the first half although no goals resulted from two quick shots. There was a header from freshman forward Megan Heisserer which missed to the right. Following that was a shot from sophomore midfielder Kate Daus that went just wide of the goal.

Southern Mississippi fought back, with two shots narrowly missing, one hitting the right side of the net, and the other rolling by the left post. The Redhawks were able to keep the game in the attacking third of the field for most of the first half.

Trouble started for Southeast when Southern Mississippi took the wind out from under the Redhawks’ wings when they got the ball to Southeast’s end and scored off a shot from redshirt junior Alice Campos in the 38th minute of play to pull ahead 1-0.

Southern Mississippi then got another chance off a free kick in the 41st minute of play when senior midfielder Cassidi Tomsu earned a yellow card after she fouled Joannie Ramos. The free kick was saved by Redhawks goalkeeper Bailey Redden, her second save of the day.

Southeast rallied back, in the 43rd minute of play Gonzales drew a foul in the penalty box which led to a Redhawks penalty kick. Sophomore defender Megan McCourt buried the penalty kick into the back of the net to tie the game at 1-1 at the end of the first half.

”We did a good job at rallying back and digging in deeper when they [Southern Mississippi] were ahead or tied with us,” Coach Nelson said.

Both teams came into the second half strong and had several chances at goals. It wasn’t until the 64th minute of play when the Redhawks pulled ahead 2-1 when Heisserer scored the first collegiate goal of her career from off an assist by Gonzales.

”It was really exciting, I’ve just been working hard in practice and I’m glad it paid off today,’’ Heisserer said.

The lead didn’t last long as in the 74th minute of play a Redhawks foul in the penalty box gave Southern Mississippi a penalty kick promptly tucked away by Hailey Pohevitz, tying the game at 2-2.

Redden immediately went back to work as Southern Mississippi had three quick shots, two of which were saved.

Gonzales finally scored the game-winning goal in the 81st minute of play to seal the Redhawks’ 3-2 victory over Southern Mississippi.

”Winning the season opener builds confidence and makes it easier to move on from than a not so good result would”, Coach Nelson, “We need to focus and get ready for Thursday.”

The Redhawks’ next game is in Oxford, Mississippi, where the team will play in the Ole Miss Tournament against host Ole Miss on Thursday, Aug. 29, at 7 p.m.