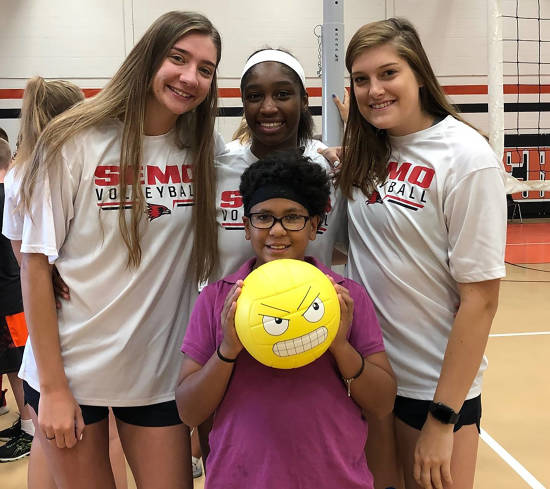 Wright said the idea for the Tiger Lilies was formed two years ago when a few female students asked why there wasn't an equivalent of the Honorable Young Men’s Club for girls. The HYMC is a mentorship program for young men at Central Middle School. Participance in the program grew from around 25 kids to roughly 80 this year.

“Our mission is to teach these girls soft skills,” Wright said. “Things like interacting with people, peer relationships and self-esteem. We want to provide mentorship to these girls.”

The average Tiger Lily meeting starts with a mindfulness exercise where the girls write about a topic given to them by Wright. Then the members recite their mutual pledge and move into the week’s activity.

The first activity last year was done with the Southeast women's basketball team. The Tiger Lilies and the players were tasked with creating a vision board: a poster that outlines a person's goals and vision for their future. Wright used the vision boards to connect meetings throughout the year.

“Southeast has been a huge supporter of what we’re doing,” Wright said. “Having the university in our community has provided a plethora of opportunities for our girls.”

Southeast coach Julie Yankus got the volleyball team involved in the program in February after asking them to pick a community service project they were passionate about. The team decided to work with youths in the area to try and make an impact on their lives. Players then attended a meeting and invited the girls in the program to come watch a match and attend a free clinic.

“We heard about the Tiger Lilies and the first meeting was great,” Yankus said. “We wanted to get more involved because they were trying to develop young women.”

Yankus said as the team attended more meetings, the players and the girls in the program began to build a relationship. Players would talk about their favorite members or funny stories about the young ladies at the meetings, Yankus said.

“We will absolutely be returning in the spring and looking to make more of an impact,” Yankus said.

Wright outlined the importance of having older girls in different organizations — specifically different sports — come and build relationships with young ladies who may not have the support systems outside of school to learn about those relationships.

“Some of our girls are really good athletes, but they might not have access to sports outside of basketball and softball if it weren't for these mentors coming in,” Wright said.

The Tiger Lilies meet on Mondays and welcome those who wish to be mentors for the program.

“One of my major goals is to have as many role models for these girls as I possibly can,” Wright said.

To inquire about volunteering opportunities with the Tiger Lilies, visit their Facebook page @CMSTigerLilies.