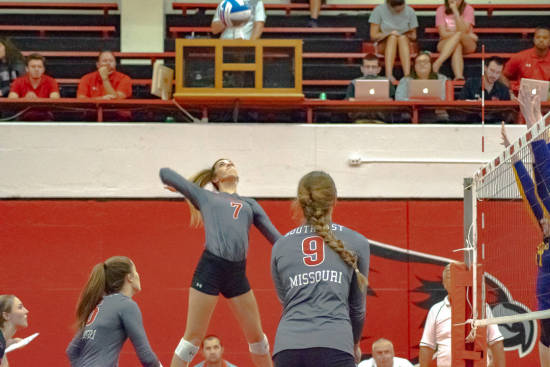 Junior outside hitter Laney Malloy spikes a ball against Western Illinois in the Redhawks Invitational on Sept. 6. Malloy was named to the All-Tournament team alongside sophomore Colby Greene.
Photo by Jelani Days

The Southeast volleyball team brought out the brooms for the RedHawks Invitational as they didn’t lose a set all weekend, beating Jackson State and Western Illinois on Sept. 6 and Evansville on Sept. 7.

In her second year at Southeast, Malloy was named one of three captains for the Redhawks. Proving herself in the 2018 season was key in landing the leadership role.

“Coming into this year, I knew people respected me because last year, I didn’t talk as much,” Malloy said. “I worked hard, proved myself and led by example, working hard in the weight room and at practice.”

In the second match Friday, the Redhawks once again recorded more kills than their opponent during their three-set sweep against Western Illinois. Colby Greene recorded 14, while Annie Wehrheim and Laney Malloy took eight each.

Southeast coach Julie Yankus, was pleased with the outcomes of the day against their more competitive schedule leading up to conference play.

“We’ve challenged ourselves more with this preseason schedule,” Yankus said. “We are going to do what is going to challenge us for the Ohio Valley Conference.”

Winning the first set was key to setting the tone in the first two games according to Yankus, and that’s just what the Redhawks did in both matches on Friday at Houck Field House.

“It’s very important that you come out strong, and then you get that confidence for the rest of the match,” Yankus said.

Wehrheim recorded 10 kills alongside Greene, while Malloy came next in line with nine.

After her efficient performance on Friday with 14 kills against Western Illinois, Greene said her confidence carried over into Saturday's game. She was named to the All-Tournament team alongside Malloy.

Ochs was named MVP of the tournament with 87 assists, 21 digs, 11 kills and eight blocks.

“I really wasn’t expecting it because I feel like everyone played really well, and I’m just so thankful that I have teammates that put the ball away for me and dig it up,” Ochs said. “Coming off of our Missouri State tournament, I think we wanted to prove a point that we are better than that. So coming in and sweeping everyone was a good feeling and gave us a lot of confidence.”

The Redhawks (4-2) are determined to carry this momentum forward as they head to Carbondale to face Southern Illinois University (3-3) Tuesday, Sept 10.