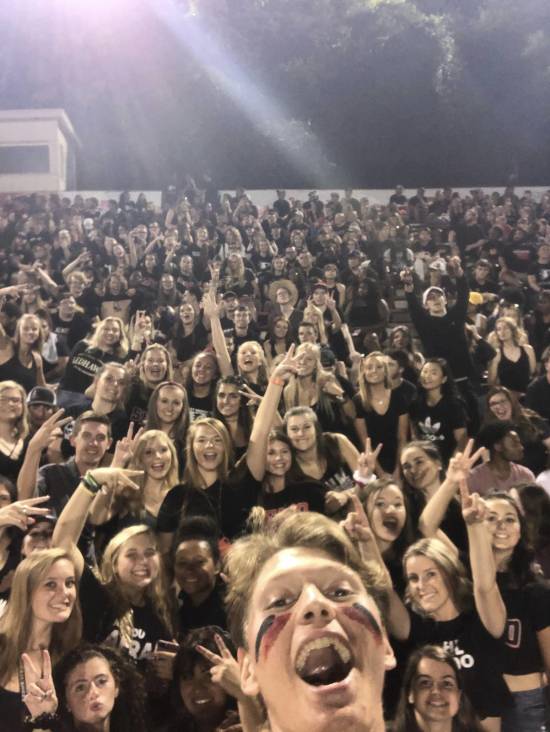 Rowdy Crowd SEMO, a new student cheering section, is ran by Phillip Lady, assistant athletic director for marketing and engagement, and Nate Saverino, associate athletic director for external affairs. Freshmen Aidan Gremminger and Sophie Machen are doing their part as student leaders to get more students out to sporting events on campus.

Gremminger said he found out about the opening for one of the student leader positions at Camp Redhawk, a summer leadership camp designed for new students.

“I wanted to allow for Camp Redhawk to make that pitch,” Lady said. “It was a good transition.”

“I think being able to see everyone come together and do something as a whole [is my favorite part],” Gremminger said. "A lot of freshmen don’t know many people here, so being able to go somewhere where they can have fun and make friends is something I hope is important to them.”

“That was honestly one of the coolest things I’ve ever seen, with that excitement and that vibe,” Machen said. “To see everyone get so pumped up, it brought us together, and I thought that was the coolest thing ever.”

The impact the duo has made in a few short weeks has been a big one. The student section came out in numbers, with a reported 1,500 students attending the home opener vs. Southern Illinois. That impact was noticed by Southeast football head coach Tom Matukewicz.

“One thing that stands out is the students. Some of you guys haven’t been here as long as I have and that’s never happened,” Matukewicz said.

Gremminger said hearing Matukewicz’s praise gives a lot of hope toward what they’re doing and believes the Rowdy Crowd can only get better.

Machen said she had a hard time believing the “huge compliment” from Matukewicz and hopes the fresh excitement and buzz will make people want to join Rowdy Crowd SEMO.

“Hopefully it got people excited, wanting to come back for another one,” she said.

Since both Gremminger and Machen are experiencing SEMO’s athletic events for the first time, Gremminger said he was unprepared for the jump from high school games to college games.

“One thing I wasn’t ready for and I should have been is that in college, everything takes longer,” Gremminger said. “You go from three hours of a football game in high school, to four hours of football in college.”

Gremminger gave some insight on how he kept his energy high during his first college football game.

“That was the most fun I’ve ever had at a football game, even if I did almost pass out from yelling.”

While Machen said she wasn’t on the verge of passing out, she still doubled down on the feeling that the football home-opener being one of the coolest things she has experienced.

Preparing for future games, Gremminger said they “have some themes in the books.”

Whatever they come up with, Lady said the goal is for the program is for it to be “student run.”

“We want this to be student-led, so we want students to have a voice,” Lady said. “We don’t want to just make the decisions. We really want to utilize what others say.”