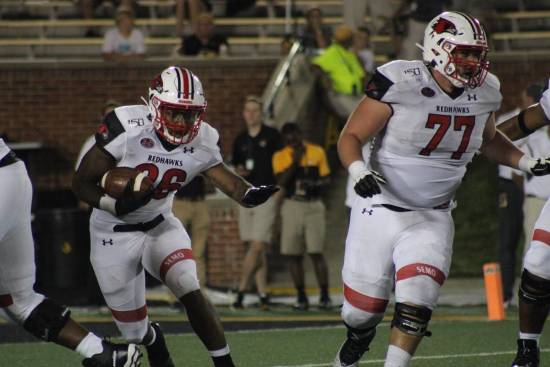 The team added 13 new players in January including three offensive linemen. The offensive line returns just one player from last season, in Elijah Swehla. This year, two transfers and one red-shirt freshman stepped up to the line. Transfer Ja’Chai Baker now upholds the right guard position while Swehla protects the left tackle.

“I’m more of the leader on the O-line.” Swehla said. “Last year we had like three or four returning starters, so I was that new guy, just learning from everyone else. Now, this year, we have so many new guys, so I’m the guy who has to show everyone how to do each play.”

Offensive line coach Ben Blake praised Swehla for how much he has impacted the newcomers and improved from the player he was just last year.

“He did a great job changing his body and mentally preparing differently,” Blake said. “This last game he had more notes taken on Montana State than any other game.”

Blake commended Swehla on how well he is bringing up the new guys, especially his opposite end. Baker was on defensive line all his life, except for the year before Southeast added him to the team. Baker said Swehla is a guide to him, keeping up the communication for everyone and making sure everyone is on the same page.

“He’s also the confidence boost guy,” Blake said. “ It’s easy to get down on people to try to correct them, but [Swehla] has done a really good job of trying to keep things positive.”

Baker is a transfer from Iowa Western Community College. He was originally recruited as a defensive tackle, but played offensive line for the first time last year before he was recruited to Southeast.

“He’s getting better,” Swehla said. “I’m trying to show him the ways and teach him the position — well really all of them since everyone’s kind of new here.”

Another transfer, Dane Nelson, is playing center for Southeast after participating in spring drills. On the right side with Baker is another transfer Jaden Rosenthal as guard. While the next fore-runner for left guard is red-shirt freshman Nate Korte.

“It’s a work in progress,” Blake said. “We have to be getting better each day, and I think we will see that as the season goes on, we will continue to get better each game.”

Since last weekend, the Redhawks have been pushing themselves harder at practices. This week they want to focus on using their physicality and their ability to keep Santacaterina off the ground whenever they go up against a top-20 prospective draft pick at nose guard at the University of Missouri.

“We may not see the initial feedback of us improving at Mizzou,” Blake said, “But I do think that you’re going to see an overall improvement as it continues to go from here.”