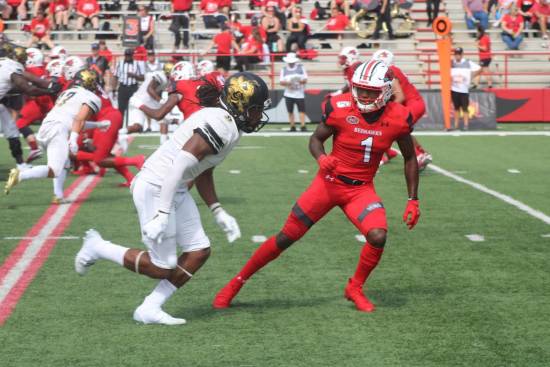 Senior cornerback Al Young defends a West Virginia State wide receiver. Young tore his Achilles tendon while intercepting a pass in the fourth quarter and will be out for the remainder of the season.
Photo by Ramond Buck

Three-headed monster. That is how one could describe the running attack from the Redhawks football team in their 56-10 win over West Virginia State on Sept. 21.

The Redhawks tallied 669 total yards of offense, the second-most in program history since joining NCAA Division I in 1992.

Despite all the success offensively, the Redhawks suffered a huge loss when redshirt senior cornerback Al Young tore his Achilles tendon while intercepting a pass from freshman quarterback Donovan Riddick with just over ten minutes to play in the fourth quarter.

“It’s crushing. I mean it really is. Just an injury like that. And life is hard, sometimes life brings you something that you’re not sure you can handle,” Matukewicz said. “The game of football prepares you for that.”

Southeast racked up 382 of their 669 yards on the ground, led by redshirt freshman running back Geno Hess, who totaled 96 yards on 10 carries and found the endzone twice.

Hess said Matukewicz made a point at the start of the week to stress the importance of establishing the ground game.

Not to be outdone, junior running back Mark Robinson ran for 93 yards on 11 carries and had one touchdown, and sophomore running back Zion Custis had 12 carries for 82 yards and a touchdown.

Southeast gained 282 yards through the air with sophomore wide receiver Aaron Alston, hauling in four catches for a total of 90 yards and a touchdown.

The last Southeast receiver to find the endzone was junior Colby Cornett who had four receptions for 53 yards to go along with his touchdown.

Custis got the Redhawks rolling early when he broke off a 29-yard run to set Southeast with a 1st and goal from the 5-yard line.

After a series of penalties, the Redhawks were faced with a daunting 3rd and goal from the 18-yard line when senior quarterback Daniel Santacaterina saw the middle open up and scrambled into the endzone for an 18-yard rushing touchdown.

Two minutes later, Santacaterina connected with Alston for a 50-yard touchdown pass to extend the Redhawks lead to 14-0 with five minutes remaining in the first quarter.

Southeast wouldn’t look back as they continued to pour it on the Yellow Jackets.

Santacaterina found Cornett open for a 26-yard touchdown pass to make it a three-score game with just over seven minutes left in the first half.

With two minutes left in the half, Hess found the endzone to push the lead to 28-0 at halftime.

The only time West Virginia State applied any pressure to the Redhawk defense came right at the start of the third quarter.

After recovering their onside kick attempt to start the half, Riddick connected with senior wide receiver Isiah Scott for a 20-yard touchdown to get the Yellow Jackets on the board.

After junior kicker Kendrick Tiller missed a 46-yard field goal off the right upright, the Redhawks went on to score on their next four possessions to push the lead to 56-10.

The Redhawks improved to 2-2 on the young season with the 56-10 victory.

“I told the team we did what we should have done. I was really focused on being physical because we wouldn’t have won a pillow fight the last three weeks,” Matukewicz said.