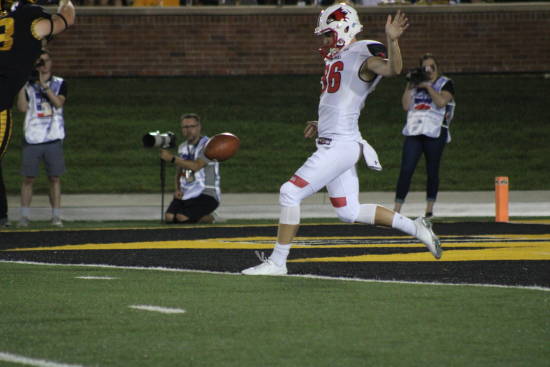 Senior punter Jake Reynolds drops the ball to punt during a 50-0 loss to The University of Missouri on Saturday, Sept. 14.
Photo by Zach Tate

“It’s one of those things where it’s not really a record you want, but when your number is called, you and your unit have to be ready,'' Reynolds said. “Whether it’s two times or thirty times, you just do what you’re supposed to. Nobody wants to punt 14 times and break a record, but on nights like that, everyone has a job to do and you gotta go out there and do it.”

Reynolds has been the starting punter for Southeast for the last three years after redshirting in 2016. He previously held the record of 11 punts in a game dating back to last season when the Redhawks took on Stony Brook in the Football Championship Subdivision playoffs.

Reynolds punted for a total of 576 yards against Missouri, averaging 41.1 yards per punt, compared to 453 total yards with an average of 41.2 yards per punt against Stony Brook.

“We try to have different formations and types of punts, kick it to the right-the left-and put a rugby punt in there to try and mix it up. We do our best with coverages and protections because a team like [Mizzou] has a lot of skill and good players on the field, but we put our players in the best situations to make plays.” said Matt Martin, Special Teams Coordinator and Outside Linebackers Coach.

Martin praised Reynolds on his experience and how he fits in with the rest of the players. As Reynolds has been the starter for three years, he is experienced and knows what the coaches expect of him. Having a consistent punter has a great effect on defense by giving them more field to work with.

“The other players all treat our specialists like part of the team. Whether it’s one play a game or ten plays a game, they have a really important role that’s just as important as the other roles. The specialists really fit in well with the team,” Martin said.

Pregame activities for the specialists are just the same as the offense and defense, and include watching film, practice and studying the other teams’ plays.

“Our coaches do a good job of getting us prepared with film and studying the other team’s return unit. So I know going into the game if they drop everyone for a return or send ten guys at me to try and block the punt,” Reynolds said.

One of the most important jobs the punter has is pinning the opposing team deep in their own territory and making them have a lot of field to make up in order to get a score.

“Jake is a great, what we like to call, pressure punter. He comes up with big plays when we need them. Last year, scheme-wise, we needed to improve on pitch-punting situations where we’re in decent field position and want to get the ball inside the ten-yard line,” Martin said, “I think Jake does a good job, especially in those pressure situations.”

The Redhawks’ next game is Saturday, Oct. 5 at 6 p.m. at Houck Stadium against Tennessee Tech.