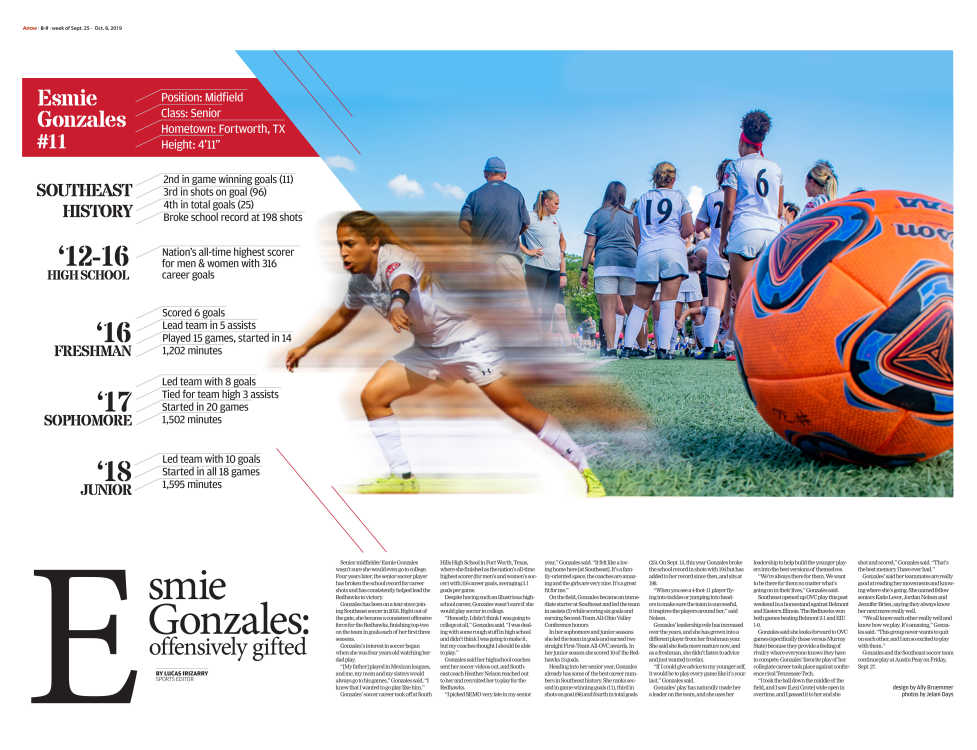 Senior midfielder Esmie Gonzales wasn't sure she would even go to college. Four years later, the senior soccer player has broken the school record for career shots and has consistently helped lead the Redhawks to victory.

Gonzales has been on a tear since joining Southeast soccer in 2016. Right out of the gate, she became a consistent offensive force for the Redhawks, finishing top-two on the team in goals each of her first three seasons.

Gonzales’ interest in soccer began when she was four years old watching her dad play.

“[My father] played in Mexican leagues, and me, my mom and my sisters would always go to his games,” Gonzales said. “I knew that I wanted to go play like him.”

Gonzales’ soccer career took off at South Hills High School in Fort Worth, Texas, where she finished as the nation’s all-time highest scorer (for men’s and women’s soccer) with 316 career goals, averaging 3.1 goals per game.

Despite having such an illustrious high-school career, Gonzales wasn’t sure if she would play soccer in college.

Gonzales said her highschool coaches sent her soccer videos out, and Southeast coach Heather Nelson reached out to her and recruited her to play for the Redhawks.

“I picked SEMO very late in my senior year,” Gonzales said. “It felt like a loving home here [at Southeast]. It’s a family-oriented space, the coaches are amazing and the girls are very nice. It’s a great fit for me.”

On the field, Gonzales became an immediate starter at Southeast and led the team in assists (5) while scoring six goals and earning Second-Team All-Ohio Valley Conference honors

In her sophomore and junior seasons she led the team in goals and earned two straight First-Team All-OVC awards. In her junior season she scored 10 of the Redhawks 15 goals.

Heading into her senior year, Gonzales already has some of the best career numbers in Southeast history. She ranks second in game-winning goals (11), third in shots on goal (96) and fourth in total goals (25). On Sept. 15, this year Gonzales broke the school record in shots with 194 but has added to her record since then and sits at 198.

“When you see a 4-foot-11 player flying into tackles or jumping into headers to make sure the team is successful, it inspires the players around her,” said Nelson.

Gonzales’ leadership role has increased over the years, and she has grown into a different player from her freshman year. She said she feels more mature now, and as a freshman she didn’t listen to advice and just wanted to relax.

“If I could give advice to my younger self, it would be to play every game like it’s your last,” Gonzales said.

Gonzales’ play has naturally made her a leader on the team, and she uses her leadership to help build the younger players into the best versions of themselves.

Southeast opened up OVC play this past weekend in a homestand against Belmont and Eastern Illinois. The Redhawks won both games beating Belmont 2-1 and EIU 1-0.

Gonzales said she looks forward to OVC games (specifically those versus Murray State) because they provide a feeling of rivalry where everyone knows they have to compete. Gonzales’ favorite play of her collegiate career took place against conference rival Tennessee Tech.

“I took the ball down the middle of the field, and I saw [Lexi Grote] wide open in overtime, and I passed it to her and she shot and scored,” Gonzales said. “That's the best memory I have ever had.”

Gonzales said her teammates are really good at reading her movements and knowing where she's going. She named fellow seniors Katie Lever, Jordan Nelson and Jennifer Brien, saying they always know her next move really well.

“We all know each other really well and know how we play. It’s amazing,” Gonzales said. “This group never wants to quit on each other, and I am so excited to play with them.”