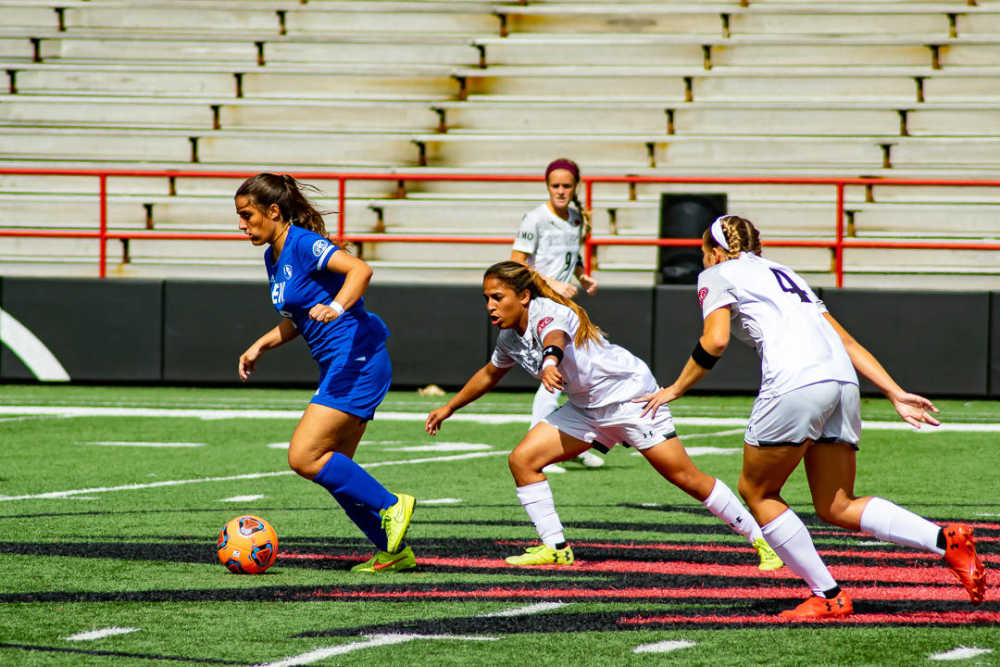 In honor of organ and tissue donation awareness, the Redhawks wore their green and blue jerseys Friday against Belmont. The memory of former Redhawk soccer player Meghan Herndon was honored during halftime.

Herndon was involved in a scooter accident Sept. 9, 2012, at the intersection of Sprigg Street and Normal Avenue. She died 12 days later at Barnes-Jewish Hospital in St. Louis.

“It’s an honor to be recognized under Meg’s name. It holds a standard for me to be who she was and play how she played. Even holding up the standards academically,” Tremain said.

Players like Tremain who did not know Herndon are still impacted by her story today.

“It makes you think twice and show up to practice every day and be thankful. To have a family that you can be around every day and joke around with, that lifts you up and to play the sport you love with. It just makes you grateful for everything that you’re given,” Tremain said.

Redhawks head coach Heather Nelson coached Herndon from 2009 to 2012 and said she is “blessed” to honor Herndon each year.

“It’s heartwarming,” Nelson said. “I feel blessed to have the connection that I have with Meg’s family.”

The Southeast soccer team beat the Belmont Bruins 2-1 in the Redhawks’ first Ohio Valley Conference matchup of the season at Houck Field on Friday, Sept. 21 and followed that win with a 1-0 shutout against Eastern Illinois on Sunday, Sept. 22.

“Conference is its own beast. Every game is a nail biter. In our sport, you get one shot and because of that there is a lot of emotion that comes into every game.” Nelson said.

Senior forwards Cassidi Tomsu and Jennifer Brien scored Southeast’s two goals against Belmont. Tomsu’s goal in the 15th minute of the first half gave the Redhawks the lead they needed to finish off the Bruins for the win.

Brien’s goal came from a fast break about forty yards out. Tomsu’s goal was assisted by senior midfielder Esmie Gonzales.

Southeast's second conference win of the weekend came in a shutout over Eastern Illinois on Sept. 22, beating the Panthers 1-0. Sophomore goalkeeper Bailey Redden is fourth in the conference in saves with 42 and was a difference-maker in the second half. Redden didn’t have to make a save in the first half as the defense held steady in front of her. Redden dominated the second half, recording seven saves and maintaining the shutout, her first of the 2019 season.

“For a goalkeeper, it is really important to have good communication with players in front of you. I focus more on organizing and communicating in front of me,” Redden said. “I wanted to keep that same mentality going into the second half.”

After an emotional night and a win against a tough conference opponent, Nelson was happy with the team's performance.

“The girls came out with a lot of confidence and did a great job connecting passes and attacking and played inspired soccer,” Nelson said.