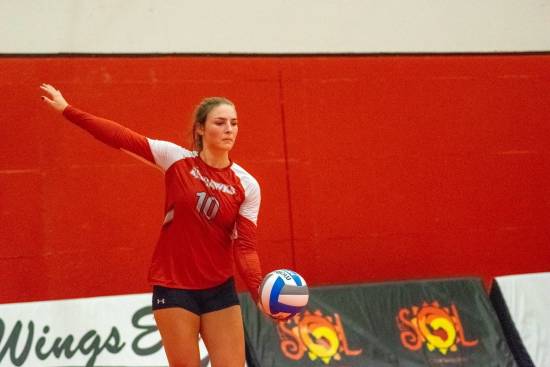 Freshman Tara Beilsmith serves in a match against the University of Tennessee-Martin in the Redhawks Ohio Valley Conference home opener at Houck Field House, Sept. 24.
Photo by Jelani Days

On Houck “Filled” House night 823 people were in attendance on Sept. 24 to watch Southeast Women’s Volleyball open up Ohio Valley Conference play against the University of Tennessee-Martin Skyhawks, with Southeast winning the match 3-1.

“Starting the OVC with a win is important because we know that every game in this conference will be a battle,” Yankus said.

The opening set was one-sided as the Redhawks registered 13 kills compared to UT Martin’s five kills. Southeast won the first point of the set and never looked back as they cruised to a 25-13 victory. The fourth and final set was also one-sided as the score ended up 25-13 again. Early on there were four lead changes and two ties in the beginning of the set.

“We did a really good job coming out early and winning the server-pass game,” Southeast Coach Julie Yankus said. "We really got them out of system and we were in system a lot so we could involve every hitter."

Laney Malloy and Mikayla Kuhlmann led Southeast in kills with 11 each.

“It was exciting,” Kuhlmann said. “We came off a good weekend in Memphis so our energy was really good going into tonight and I think that really helped me and the other hitters.”

The second set was more competitive as both teams had 12 kills. There were six ties and two lead changes in this set alone, but Southeast emerged victorious with a score of 25-17. The Redhawks were evenly distributed on offense in the first two sets.

“We gave the same number of balls to each attacker, which is hard to defend,” Yankus said.

In the third set Southeast faced adversity as they lost by a close score of 25-22. UT Martin stepped up, getting three more kills than the Redhawks.

“We just had to stick to our game and play our volleyball and respond to their volleyball, which is what we focus on every match” Yankus said.

Southeast’s next game is Sept. 28 against Tennessee Tech in Cookeville, Tennessee.