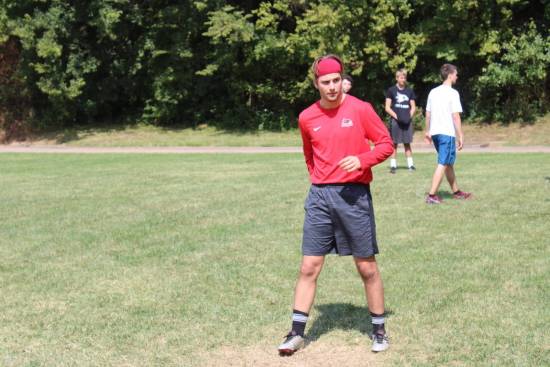 Freshman Dillon Lauer, the founder of Southeast's Spikeball Club participates in a match in the "Biggest Game in Missouri" on Sept. 28 at Brandt Field.
Photo by Ramond Buck

Southeast freshman Dillon Lauer is responsible for bringing the Spikeball club to campus and has begun to make waves, encouraging others to join the club. His inspiration to found the club came over the summer between his senior year of high school and his freshman year at Southeast.

Spikeball is a sport played by two teams of two players. The teams line up across from each other with the spikeball net in the center, and players can move anywhere after the ball is served.

Lauer played volleyball his senior year and felt like spikeball was a similar sport, so he downloaded the official spikeball mobile application and followed the main page on Instagram.

“[Spikeball] has around 300,000 followers on instagram so I knew the sport was growing, but I wanted to grow it here because I knew (Southeast) didn’t have it,” Lauer said. “It gives students that aren’t involved a chance to be a part of something.”

Lauer has his own spikeball page on Instagram and he follows organizations and clubs already established on campus so that he can relay information about upcoming events and get people excited to play.

Ultimately, Lauer said he wants everyone on campus involved in the game.

“We have around 1, 000 followers right now,” Lauer said. “I’ll walk around campus … people won’t know my name but they’ll see me and know me as the spikeball guy. From there I just tell them a little bit about what spikeball is. I like to be interactive.” Lauer said he feels this is a perfect opportunity for students who aren't really involved in extracurricular activities to participate.

Lauer said his vision for the club is solely based on expansion this semester; he wants to triple his active members from 25 right now, up to around 70 by the year’s end.

He loves the idea of giving students an activity to participate in during their free time, while also meeting people who may share common interests.

“People are sometimes intimidated by bigger sports such as football or basketball. This is a game for everyone to play,” Lauer said. “You don’t have to be in shape or specially trained to learn. That's what I love most.”

The club plays every Monday and Thursday from 5:30 p.m.to 7:30 p.m. and is open for everyone to join. Lauer is hosting a special spikeball event Saturday, Sept. 28, from noon to 4 p.m. at Brandt Field.

To get involved or learn more about the Spikeball club, contact Lauer at dillon.j.lauer@gmail.com.