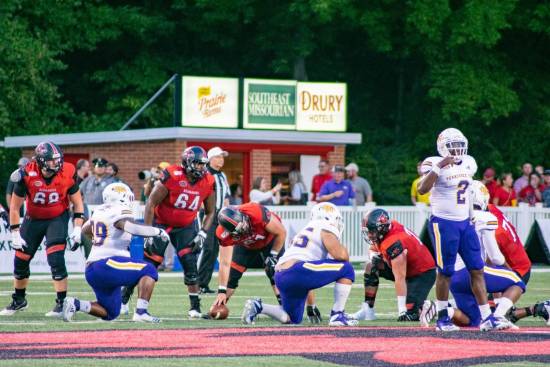 Junior center Dane Nelson prepares to snap the ball on an offensive drive against Tennessee Tech at Houck Field, Oct. 5. The Redhawks offensive line allowed four sacks on the day but blocked well in the run game. Southeast rushed for 221 yards and five touchdowns in the win.
Photo by Jelani Days

The roar of 4,300 fans at Houck Field rang out as Southeast’s defense stopped the Tennessee Tech Golden Eagles on fourth down in double overtime to seal the Redhawks 43-37 Ohio Valley Conference win over the Golden Eagles. The win marked Southeast’s 10th straight home win, dating back to last season.

In the first overtime, Golden Eagles sophomore quarterback Bailey Fisher connected with senior running back Andrew Goldsmith for a 3-yard touchdown pass to give the Golden Eagles the lead.

On the ensuing Southeast possession, Mark Robinson had a 16-yard touchdown rush on fourth-and one to keep the game alive.

Southeast got the first shot at scoring to start double overtime.

The Redhawks wasted no time as Zion Custis ran for a 13-yard touchdown on the third play of the drive.

However, after junior kicker Kendrick Tiller missed his second extra point attempt of the evening, the Golden Eagles found themselves down by six and in possession of the football.

Southeast coach Tom Matukewicz elaborated on how those mistakes bother the players more than anyone else.

“Those kids it bothers more than you and me combined. And they wanna do well, they want their teammates to do well,” Matukewicz said.

The Redhawks’ defense stopped Tennessee Tech on four consecutive drives in the second half, which allowed Southeast’s offense to take a 30-27 lead with just over five minutes of regulation play remaining.

Matukewicz was pleased with the performance of his defense against a potent Tennessee Tech offense.

“I thought those guys did a tremendous job. That was a good offense,” Matukewicz said.

Southeast’s running backs shouldered most of the load offensively as sophomore running back Zion Custis had 18 carries for 117 yards and one touchdown.

Junior running back Mark Robinson had 13 carries for 77 yards and three touchdowns to cap off his evening.

Redshirt-freshman running back Geno Hess had seven carries for 36 yards and scored the go-ahead touchdown late in the fourth quarter.

“I think those running backs are really starting to come on and have good ball security,” Matukewicz said.

Sophomore wide receiver Aaron Alston had two receptions for 35 yards which included a catch in the endzone to give Southeast a lead early in the second quarter.

“You see them have so many opportunities to go up and get it because I trust them, and they continuously go up and get it successfully. It’s nice as a quarterback to have those two guys,” Santacaterina said.

After Hess scored with just over a minute to play in regulation, a 31-yard return on the kickoff by Tennessee Tech freshman wide receiver Metrius Fleming gave the Golden Eagles good field position to start the drive.

The Golden Eagles offense stalled at the Southeast 34-yard line, but senior kicker Haidar Zaidan drilled a 51-yard field goal to even the score at 30 with just 30 seconds left in regulation.

The Redhawks’ defense shut down the Golden Eagles offense as junior defensive back Robert Hatchett III batted down a fourth down pass in the endzone.

Sophomore outside linebacker Derrick Calhoun Jr. racked up 12 tackles and one forced fumble in the win.

“I’d have to say our coach [Saia]. He called the right plays at the right moment and put us in the right spot to do what we needed to do,” Calhoun said.

Southeast will be on the road for the next two games as they travel to Austin Peay on Oct. 12 and Jacksonville State on Oct. 19.