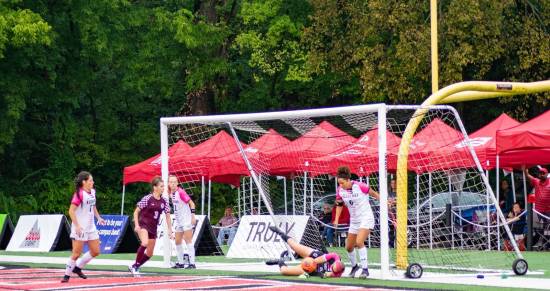 Sophomore goalkeeper Bailey Redden makes a diving stop against Southern Illinois on Oct. 6 at Houck Field. Redden shutout the Salukis 2-0 with four saves. The game marks her fourth shutout of the season.
Photo by Jelani Days

Southeast freshman forward Hailey Block was the story of the game in the Redhawks’ double-overtime win over SIUE. After 65 scoreless minutes, Block scored the first goal of her career off senior forward Emily Holten's pass to give Southeast a 1-0 lead.

With 12 seconds left in regulation, SIUE tied the game 1-1 with a low shot to the bottom right corner.

After one scoreless overtime where both goalies were forced to make a save, senior forward Jennifer Brien dribbled through three defenders in the second overtime to pass the ball through the legs of a Cougar defender to set Block up for her second goal of the game in double overtime to give the Redhawks the win.

“It was an exciting way to get my first two goals in college, especially in a big conference game,” Block said.

The win was a bounce-back game following a 5-0 loss to OVC opponent Murray State. Southeast coach Heather Nelson praised the Redhawks’ grit and ability to respond when SIUE tied the game late in regulation.

“This win was really important to show we’re here to stay and that we are a contender,” Nelson said. “It was a good test, [SIUE] tying the game with less than a minute to go, and I was very happy with our response to that adversity.”

Southeast turned to face the Salukis of SIU on Sunday and churned out a 2-0 shutout win with sophomore goalkeeper Bailey Redden recording her fourth shutout of the season, including four saves.

Block continued her hot streak, scoring the first goal of the game in the 18th minute of play off a redshirt-senior defender/midfielder Siena Senatore pass to give the Redhawks a 1-0 lead.

Freshman forward Kennedy Jones made her first appearance of the season after being out with a concussion, among other injuries. Jones scored her first career goal in the 87th minute of play assisted from senior midfielder Esmie Gonzales, giving Southeast a cushioned 2-0 lead to finish the game.

Being injured most of the season thus far, Jones knew she had to be ready and willing to do what was needed if she were to see the field.

“I just knew that whatever happens next is what’s meant to be,” Jones said. “If I play, I play. If I don’t, I don’t. I just knew that I had to work my hardest to get back for when the team needs me.”

Southeast picked up their fourth conference win this season, which is already more than last season (3-4-3). Now 4-1 in conference play, the team’s confidence is up heading into the rest of the season.

“Last year we weren’t finding the back of the net,” Nelson said. “In the situation now, in conference [play], you go in a little bit more in your performance zone and it’s definitely a more enjoyable journey.”