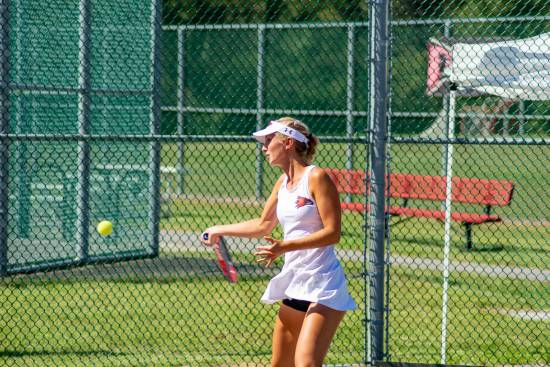 Junior Maja Lundell hits the ball back to her William Woods University opponent on Oct. 5 at the Redhawks Tennis Complex.
Photo by Jelani Days

The Southeast women's tennis team had a victorious weekend over William Woods on Oct. 5, as the Redhawks swept the doubleheader 5-2 and 6-1.

“It was nice to have a match to work on what we’ve been practicing, and since it wasn’t a conference match there was less pressure, which allowed us to focus on improvement,'' Southeast coach Mary Beth Gunn said.

The first meet of the doubleheader saw Southeast take two of three doubles matches and five of the seven singles matches.

In singles competition, sophomore Romana Tarajova defeated Ana Zavala 6-4 and 6-1in the No. 1 matchup. Sophomore Teona Velkoska took down Alessa Cremer 6-1 and 6-0 for the win in the No. 3 slot. Freshman Vivian Lai beat Mireia Jordan 6-2 and 6-2. Junior Maja Lundell defeated Hannah Meyer 6-2 and 6-2 in the No. 5 slot to finish out the singles wins for Southeast.

Southeast No. 1 (Tarajova and Zonova) and No. 2 (Lai and Velkoska) duos took care of business and picked up 7-6 and 6-1 wins over William Woods.

“In doubles, it’s especially important to be able to hold serve, and you’re being an aggressive player,” Gunn said.

Southeast has been working controlling matches in their practices by playing close to the net and faster than their opponents.

“We’re going to keep working on taking the ball early to eliminate our opponents' recovery time and coming into the net to put the ball away,” Gunn said.

Southeast carried their success from the first meet into the second meet of the doubleheader, taking two of three doubles matches and six of seven singles matches to fair slightly better than the first meet.

In singles competition, No.1 Tarajova downed Cremer. No. 2 Zonova beat Meyer. No. 3 Velkoska took down Zavala. No. 4 Lai defeated Shuraeva. No. 5 Lundell took down A. Jordan.

“In singles, it’s not as easy to win the point at the net, so you’re going to have to win some points from the baseline,” Gunn said.

In doubles competition, No. 1 Tarajova and Zonova downed Cremer and Meyer 6-1 while No. 3 Lundell and Powderly beat. M. Jordan and A. Jordan 6-2.

Coach Gunn was pleased with how her team put the lessons from practice into their play.

“In this week's practice, we’ve been working hard on some specific offensive plays, and I think we ran them really well today,” Gunn said.

The Redhawks' next meet is Oct. 17 through 22 at the Intercollegiate Tennis Association Central Regional Tournament in Murfreesboro, Tennessee.