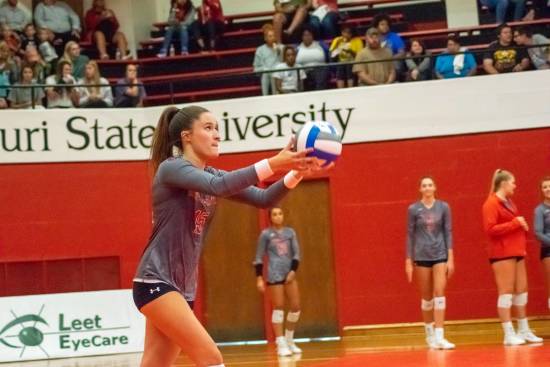 The Redhawks and the Cougars traded punches back and forth like heavyweight prize fighters in a fifth and decisive set that featured 14 ties and eight lead changes. SIUE finally got the two-point advantage necessary to win off of a service error by the Redhawks and a block assist on match point.

“I’m proud of some of the things we did in that fifth set,” Southeast coach Julie Yankus said. “We took really aggressive swings when the match was on the line and really showed some guts and heart in that set; [I] just didn’t think we should’ve had to go to five in the first place.”

It was a case of Jekyll and Hyde for Southeast in the first four sets. For sets one and three, the Redhawks looked like the varsity team playing a junior-varsity team. However in sets two and four, it was their turn to be the JV playing against the varsity.

In the first and third sets, the Redhawks had double-digit leads before they even reached 20 points, and Southeast held the Cougars to a negative hitting percentage in each of those sets while posting hitting percentages of 29% and 32%.

“The ones we were dominating, we were able to get them out of [their] system,” Yankus said. “They couldn’t set their middles and right sides who are their go-to attackers; that was the difference in those sets.”

Sophomore setter Claire Ochs had 44 of the 52 Redhawks’ assists, as well as 16 digs which was the second-highest number for the team behind senior defensive specialist Emily Boggetto’s season-high of 18 digs. Boggetto also led the team with three service aces.

The weekend was not a total loss for Southeast, however, as they also secured a straight sets victory over Eastern Illinois. This one was much more straightforward for Southeast, but not without some drama.

The Redhawks fell behind early in the first and third sets, but battled back each time to win both and pick up the straight sets win.

The first set was a struggle as Southeast hit 14%, but the Redhawks stayed competitive in the set by holding the Panthers to a 0% hitting percentage. The set was tied at 21, but Southeast would win four of the next five points to take the set.

In the second set, the Redhawks left no doubt as they ran out to an 11-0 lead and never looked back.

In the third set, Southeast fell behind 8-3 before turning on the jets and outscoring EIU 22-8 the rest of the way, thanks to a scorching 44% hitting percentage.

Krista Berns tied for the team lead in kills for this match with Laney Malloy who had eight. Berns ended the night with a 70% hitting percentage to lead Southeast.

Ochs had the majority of assists in this match as well, ending with 30 of the 36 Redhawks’ assists while accumulating nine digs. Freshman defensive specialist Tara Beilsmith finished with 12 digs to lead the team. Emily Boggetto also led Southeast in aces this match, finishing with five.

Southeast’s record now stands at 12-8 overall with a 4-2 record in Ohio Valley Conference play. Entering the weekend, the Redhawks were tied for first in the OVC but the loss pushed them into a tie for second place.